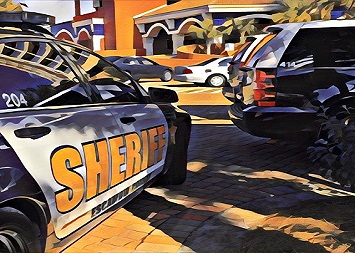 Pensacola FL Nov 30 2021 A Virginia man is accused of inappropriately touching a 17-year-old girl in the parking lot of an Escambia County business where he was a security guard in summer 2020.

Christopher Lee Hatcher, 33, of Charlottesville, Virginia, was arrested Friday and charged with sexual battery on a victim between the ages of 16 and 17.

He was booked into the Escambia County Jail with a $50,000 bond and remained in custody as of Monday morning.

Escambia County Sheriff’s Office investigators were contacted June 19, 2020, by a concerned father who said his daughter had been “hit on” and possibly sexually battered by Hatcher, who was employed as a security guard at her workplace, according to an arrest report.

The father said he knew his daughter had recently deleted text messages she had previously exchanged with Hatcher “because she was ashamed of what happened,” the report stated.

The father and daughter consented to turn over the teenager’s cellphone to the ECSO for a forensic examination, and investigators recovered the text messages. They showed several photographs of the two, including one of them holding hands, that “a reasonable person would believe they were in a relationship,” according to the report.

The girl told investigators she and Hatcher developed a flirtatious relationship during lunch breaks at work. The girl said that on one of her lunch breaks, Hatcher asked her to sit in his car with him and then put his hands down her pants despite her saying no and pushing him away.

Hatcher agreed to speak with ECSO investigators July 31, 2020, but the day before the interview, he left a voicemail on an investigator’s phone saying that he would not be able to make the meeting and it would be “several weeks” before he could reschedule.

A warrant was written for his arrest