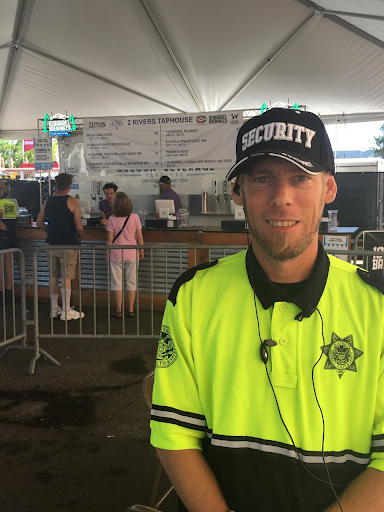 EUGENE, Ore. July 28 2021- Brian Hyta was working security at the Lane County Fair a fairgoer alerted him to a fight.

“So I instantly ran over to see what was going on,” Hyta said. “Three guys were jumping on one older guy, and then the crowd was yelling at me: there’s a gun, there’s a gun, he has a gun.”

Hyta says the 16-year-old with the gun started to run – and Hyta tackled him. That’s when the gun went off.

“That’s when I grabbed him,” Hyta said. “Pinned him down. And as I was pinning him down he fired one shot. The shot ricocheted off the ground and hit this civilian. Went through her arm.”

Aric Williams was serving fairgoers in the beer garden tent when that gunshot rang out.

“There was just like a lot of screaming and a massive wave of people crashing through the tables and the chairs and stuff,” Williams said. “And that’s when the gunshots registered in my brain.”

Williams ran to hide inside the tap trailer, helping shelter others inside, including a mother and baby.

“During the commotion, the baby had been in the stroller and hadn’t been strapped down so people had bumped into it he had fallen out and landed on his face on the pavement,” Williams said.

The baby, which Williams says was around 6 months old, had abrasions on its face and cheeks.

“I sprinted to the other end of the park where the EMTs were located. And they said they would send someone as soon as they could,” Williams said.

Williams said once the area was secure, medics arrived and took the baby away on a stretcher.

As for the woman who was shot, Hyta called for a medic. She was later taken to a local hospital.

Eugene Police said her injury is not life-threatening.

Meanwhile, Hyta kept the 16-year-old shooter pinned down until armed security arrived and detained him.

Eugene Police said another teen involved in the incident, a 14-year-old, disturbed evidence and was also detained.

“The situation locked down pretty quickly and was taken care of very efficiently,” Williams said.

Eugene Police tell us the 16-year-old has been charged with assault in the second degree with a firearm, unlawful use of a weapon, and unlawful possession of a firearm.

The 14-year-old has been charged with tampering with evidence and disorderly conduct. Both juveniles are in custody and are currently lodged at Serbu.

The fair was back open on Sunday after the shooting.

Fair organizers tell us there was high attendance Saturday night and Sunday, but following the shooting, some things are different.

While there was previously security at all gates, there was no bag check.

“We have made some changes,” said Rachel Bivens, the assistant manager of the fair. “We have additional security on site. We are doing bag checking at every gate and we have limited entry points.”

Bivens said it wasn’t possible to get metal detectors at such short notice.

Now, another issue in the aftermath of the shooting is lost items. Many people dropped their belongings in the chaos.

Bivens said they have a lost and found team working to reunite people with their belongings.