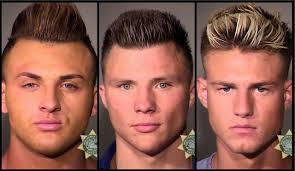 Portland OR September 11 2019 Three men were arrested in connection with an attack that left a security guard with a fractured skull early Saturday in downtown Portland.

Vasiliy Yashchuck, George Chumachenko and Andrea Feyster were arrested on suspicion of disorderly conduct, according to a Portland police spokeswoman. Each has been released from custody on his own recognizance.

KOIN (6) reports the guard, who was attacked outside the news station’s namesake tower on Southwest Columbia Street, suffered a fractured skull, broken nose and other injuries.

It wasn’t immediately clear what led to the incident.

Yashchuck’s surname is spelled as “Yashchuk” in booking and court records. The correct spelling of his surname is unclear.

‹ University of Georgia employee who stole more than $1.3 million commits suicide › Woman banned for life from Disney World over cigarette