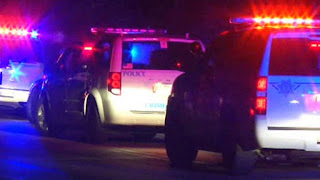 STOCKTON CA May 23 2020A security guard attempting to stop two suspects from shoplifting is in the hospital after being struck by a third suspect in a getaway car, the Stockton Police Department said.

Police said the suspects arrived at a store at around 8:40 p.m. on Wednesday night in the 4700 block of Quail Lakes Drive.

Two suspects got out of the vehicle and entered the store where the security guard was working and attempted to shoplift, police said.

The suspects engaged in a fight with the guard outside of the store, where the third suspect drove toward the guard and struck him with the front of the vehicle, police said.

Stockton police said the other two suspects, described as two black females approximately 20 to 30 years old, got into the vehicle and left the scene. There was no description available for the driver.

Authorities said the security guard was taken to the hospital for treatment and the stolen merchandise was recovered.

Anyone with information relevant to the investigation is asked to contact the Stockton Police Department.