Security guard jumps to safety; ‘There is a God’ after describing Syracuse strip club crash 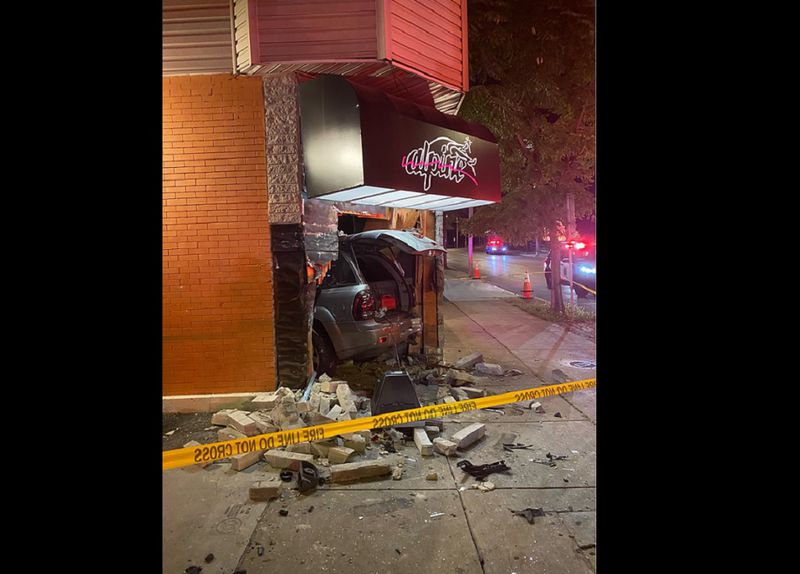 The 46-year-old father of two said he jumped out of the way moments before the vehicle crashed into the strip club on Syracuse’s North Side.

The driver was trying to avoid another vehicle that had run a red light, Gunner said.

Alpine owner Gary Salvatore said the two vehicles crashed at the intersection in front of his business before one of the vehicles continued through the front doors of the club. This was the fourth crash at Alpine in the last five years, Salvatore said.

Saturday night, six employees and one customer were inside, Gunner said. None was hurt, he said.

Someone initially thought Gunner was injured, or even possibly trapped under the vehicle, because he had been standing where the vehicle crashed. But he was OK.

“I jumped out of the way,” he said. “I was just laying on the ground in shock.”

When the vehicle crashed into the building, the front entryway crumbled. The front door was pushed inside; an exit sign that once hung on the back of the door now sat on top of debris in front of the bar.

Syracuse police and firefighters, and American Medical Response ambulance staff responded to the club at 401 Butternut St. at 10:09 p.m. EMTs and paramedics helped both drivers. One person was taken to a hospital and two others were treated at the scene, according to a news release from the Syracuse Fire Department.

Salvatore, the business owner, said he thought the man driving the other vehicle was injured, but it was not clear whether he was transported to a hospital. A police spokesman could not immediately be reached for information.

Salvatore said the club will be closed for a few days. He’s hoping to reopen by Wednesday.

This isn’t the first time he’s had to clean up and remodel after a crash, he said.

Five years ago, a car crashed in through the front doors, he said. Two years ago, a truck slid into the side door that leads upstairs; that door still remains boarded up. And then last May, a car flipped in front of the door and hit a pole, Salvatore said.

After the crash Saturday night, Gunner, the security guard, looked at all the debris and could only think of one thing as he talked about how he narrowly missed getting hit by the vehicle: getting home to his 7- and 8-year-old sons.

“There is a God out there,” he said. “Someone is looking over me and now I get to go home to my kids.”