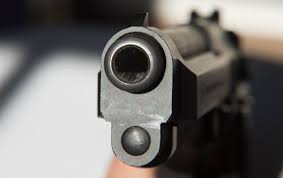 A cash-in-transit security guard was fatally shot while another was wounded during a heist at Boxer Superstores in Motherwell on Thursday.

The robbers fled with an empty cash box after ambushing three guards outside the store at about 1pm.

According to police, several shots were fired in the centre’s carpark during the heist.

The incident led to one guard being shot in the head at point-blank range while he was exiting the ATM cubicle.

Police said the three guards were at the centre to top up a Capitec Bank ATM when the heist happened.

Police spokesperson Captain Johan Rheeder said: “It is unclear as to who was shooting but shots were fired.

“At this stage it appears that the guards were leaving the ATM when five suspects confronted them.

“The guard with the cash box was shot in the head and his firearm stolen.

“The guard walking with him was shot in the arm. The other guard stayed in the vehicle until the suspects fled.

“The suspects fled with the cash box and appear to have split in several directions.

“A Datsun Go, Mazda 323 and a Quantum minibus were used as getaway vehicles.”

Rheeder said it was still unknown whether the vehicles were hijacked in the carpark or if the suspects arrived in them.

“The Datsun Go and the Quantum were recovered abandoned shortly after the incident,” he said.

By 3pm, the Mazda had been found by police abandoned in Kaulela Road, KwaMagxaki.

Only hours before, at about 9am, a clothing store in Main Road, Kirkwood, was robbed.

Police spokesperson Captain Gerda Swart said it was alleged that two suspects, one armed with a firearm, entered the business and threatened the store workers.

The workers were tied up and the suspects allegedly took an undisclosed sum of cash from a safe as well as several cellphones from the store.

“The suspects then jumped into a white Toyota Corolla, where two other people were waiting, and sped away.”

She said police were following up on leads.