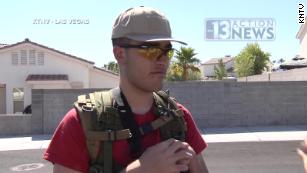 Conor Climo, 23, was planning to attack a synagogue and a gay bar, the FBI said.

Climo was in touch with members of Feuerkrieg Division, a white supremacist extremist group, according to court documents. The group “encourages attacks on the federal government, critical infrastructure, minorities, and members of the LGBTQ community,” the US Attorney’s Office in Nevada said.

Climo admitted to discussing “setting fire to a Las Vegas synagogue and making Molotov cocktails and improvised explosive devices” in online conversations between May and July 2019, the US Attorney’s Office said.

“The defendant’s threats of violence — which were motivated by hate and intended to intimidate or coerce our faith-based and LGBTQ communities — have no place in this country,” the US Attorney’s Office said in a statement.

Las Vegas was the site of the nation’s deadliest mass shooting in modern US history, when 58 people were killed and more than 500 hurt in October 2017.