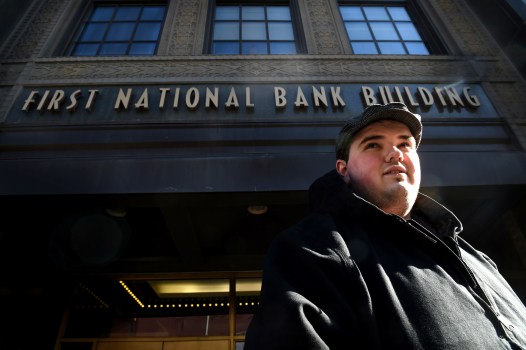 As a security guard for downtown St. Paul’s largest property owner, Madison Equities, Chris Lewis was eager for extra hours beyond his full workweek at the First National Bank Building.

The 20-year-old said his supervisor told him he could moonlight at the company’s other major buildings, such as the Alliance Bank Building or Park Square Court. But Lewis had to sign in anew — as if he were starting a new workday for a different employer.

Even after working 16-hour days, he never received pay at the time-and-a-half overtime rate.

“Instead of putting those extra eight hours on the First Bank time sheet, they would say, ‘You’ve got to put it on the Madison Equities time sheet,’ ” Lewis recalled. “Even if I didn’t work any other building, we would get two checks, and it would show up as base pay. We would not get overtime at all.”

Lewis received checks with the same corporate address, “same suite number, but two different LLCs. It was all stamped with James Crockarell’s name, every single time. … This is all owned by James Crockarell.”

Crockarell defended his business practices and added the complaints are part of a union’s effort targeting him. As for the lack of overtime rates, he notes that his company owns 18 buildings in downtown St. Paul through some 20 to 25 different limited liability corporations.

Lewis, who left employment with Madison Equities in August after 1½ years with the company and joined a unionized security firm, isn’t convinced by Crockarell’s explanation. Both federal and state law require overtime pay after 48 hours of employment, or after 40 hours of employment for large businesses.

Lewis believes that he and other security guards are owed thousands of dollars in back pay at overtime rates.

After relating his experience to the Service Employees International Union’s Minnesota State Council, a labor organization that represents security guards, janitorial workers and other support staff, Lewis chose to notify Minnesota Attorney General Keith Ellison’s office about six weeks ago of his concerns. Additional employees have been interviewed, and an investigation is reportedly underway.

John Stiles, a spokesman for Ellison’s office, said Friday he was not personally familiar with the case and had not yet heard back from the office’s wage theft investigators. In addition, the standard procedure for the attorney general’s office is to not comment on open investigations.

The labor organization has posted statements to its website and circulated notices with the media. “The complaint alleges that workers were unpaid by many thousands of dollars,” reads the latest notice from SEIU spokesman Josh Keller.

Lewis has filed a separate complaint with the city of St. Paul Human Rights and Equal Economic Opportunity Department alleging that he and other security guards were told to produce a doctor’s note if they wanted to access even a day of paid sick time, a possible violation of the city’s earned sick leave mandate.

Under the sick leave ordinance, employers can ask for “reasonable documentation” of an illness, such as a doctor’s note, only if an employee has been absent for three consecutive days or exhibited a pattern of abusing their sick time.

On Friday, a spokeswoman for the HREEO Department acknowledged it had received the complaint but said they could not make it public or comment on an open investigation.

Crockarell, however, said he plans to mount his own legal case against SEIU. He noted that the state’s most recent wage theft legislation — the Minnesota Wage Theft Prevention Act — went into effect over the summer after Lewis had already left employment with Madison Equities.

Crockarell said that SEIU’s latest efforts amount to a union membership drive rather than a sincere attempt to seek back pay. He noted that Lewis had complained of not receiving a higher-than-normal pay rate for working holidays, which is not required under Minnesota law.

“It appears that we’re being set up by this SEIU union and this disgruntled employee,” he added. “They’re making threats to us, they’re committing slander against us. They did the very same thing to a Texas employer that they’re trying to do to us, and that employer won a $5 million judgment.”

Crockarell said if any of Madison Equities’ practices are found to not comply with current law, he’d be happy to correct those business practices. He added, “We have nothing to hide from SEIU or the Attorney General’s office, either one.”