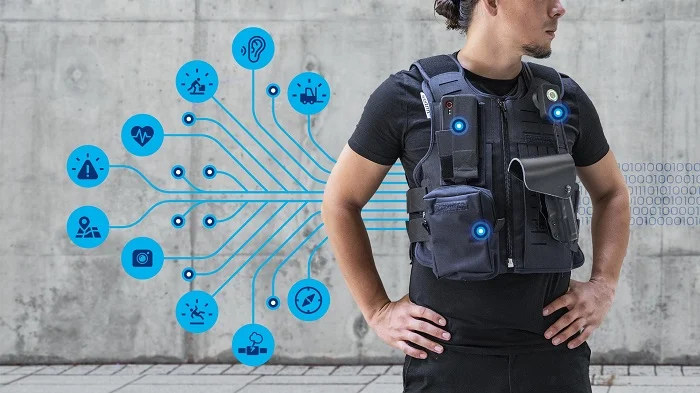 Switzerland November 27 2022 Since the beginning of October, all the agents at the security company SOS Cash & Value have been equipped with the intelligent vest from Wearin’, the startup whose internet of things (IoT) technology is specifically designed to reinforce the safety and efficiency of its mission-critical teams on the ground.

The high-tech vest that SOS Cash & Value’s security guards wear at all times during their mission throughout Switzerland is equipped with environmental and biometric sensors connected to the monitoring center based at the security company’s headquarters in Vernayaz (Valais). The Wearin’ dashboard integrated into the center’s warning system provides real-time information on the situation on the ground. It continuously displays the data from the sensors whose algorithms correlate biometry, movement, acceleration and positioning in the vicinity and in the armored vehicle, which is also equipped with a specific sensor. An alarm is automatically triggered when the system detects an abnormal situation such as a security guard falling over (Man Down detection), or the stress caused by an incident such as an attack on a vehicle. The alert and communication system between the agents and the monitoring center enables the SOS Cash & Value mission leaders to decide on the actions and measures to secure and intervene with the emergency services and police forces at the scene of the incident.

The technology developed by Wearin’s R&D engineers in Morges (Vaud) was successfully tested on a European scale in May 2022, during first-aid drills in the event of a major disaster. It is intended for organizations whose staff is called upon to coordinate risky activities and interventions on the ground, such as police forces, firefighters and first responders, or lone workers in the logistics or construction sectors.

“Our IoT technology is unique on account of its ingenuity as well as its integrability and modularity,” specifies Alvaro Goncalves, Wearin’s technical director. “We implement it as a turnkey end-to-end solution, on two platforms that communicate permanently with each other: on the one hand, the physical platform of the smart vest worn in the field by the customer’s staff and, on the other hand, the digital platform that is easily integrated into the customer’s monitoring system. The digital platform collects and centralizes the data transmitted by the vests’ sensors. These data are processed by artificial intelligence and then displayed via an application on a security dashboard used by the operators in the engagement and monitoring centers. Both platforms are modular and scalable. Our solution is designed to be adapted very easily and quickly to the customer’s own needs and technological capabilities.”