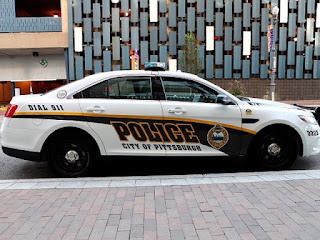 Pittsburgh PA Sept 30 2017 Pittsburgh police have arrested a man who injured a security officer while trying to rob a bank Monday on the South Side.

When the would-be robber made eye contact with the security guard, he fled the bank, running north on South 25th Street toward Sydney Street.

The security officer began a chase and was cut on his left hand as the pair struggled briefly, police said.

The would-be robber then got into a gray SUV and drove off.
The security officer was taken to UPMC Mercy in Uptown for treatment of his injury.

The robbery was the third time in a month the South Side bank was targeted.

A man wearing a black stocking over his face entered the bank Aug. 30 and pointed a handgun at a security guard and ordered him to the floor, investigators said.

The man then pointed the gun at tellers and demanded money before running out with an undisclosed amount of cash.

On Aug. 24, a man wearing a stocking pulled down to the top of his mouth walked into the bank with a gun and ran out with cash.

Police are investigating whether the robberies are connected.