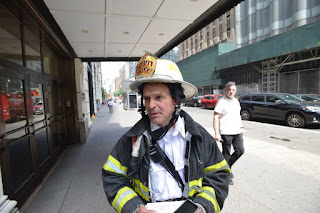 Authorities say that a security officer was killed in Manhattan Saturday morning when at least one large glass panel crashed on top of him, according to officials and witnesses.

Construction workers were in the process of moving the panel on the first-floor loading area of a construction site on West 57th Street near Broadway around 10:30 a.m., authorities said.
It fell and struck the sixty-seven-year-old security officer according to police.

The security guard was pronounced dead at the scene. A 27-year-old construction worker who was injured while trying to save the guard was taken to St. Luke’s-Roosevelt Hospital with non-life-threatening injuries.

“When we arrived here, workers were in the midst of getting him out,” said Deputy Chief Tom Currao of FDNY Division 3.

“It was a 10-by-20 very, very large glass panel that had fallen and injured – a very serious injury to that security officer,” he added.

A construction worker on the scene claimed that the entire crate fell on the security guard.

“He was just standing there and he wasn’t even thinking about it and it just fell on him,” said one worker, adding that the crate held several pieces of wood, each weighing several hundred pounds.

“I don’t think he ever saw it coming… It just fell on him and he wasn’t looking,” the worker said.

Construction workers used a lift to get the crate off the security officer, he added. The workers carried him into a waiting ambulance, Currao said.