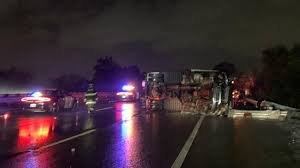 A box truck, with several armed guards reportedly protecting a “special load” for Apple, was tragically involved in a fatal crash.

The incident took place Wednesday on Highway 101 in San Jose. It happened in the early hours of the morning and left one former police officer dead, and another injured. The driver, who survived, is said to have fallen asleep at the wheel.

“Multiple sources told NBC Bay Area the men were working for SIS Security, which has an office in San Jose. The sources say the men were transporting highly sensitive products for Apple.
The California Highway Patrol said it doesn’t know the nature of the cargo, and it’s still under investigation.”

The case is still open with CHP and officer said.

Investigators said they are not sure if speed was a factor and it’s not thought that the driver had exceeded the number of hours which can safely be worked before requiring a rest.
Both of the people on board were retired police officers from the Los Angeles area.
One of the men who died has been confirmed as 64-year-old Richard Bartolo, previously with the Irvine Police Department.

SIS Security said that “Rich was an incredible man who was loved by everyone at the Irvine Police Department. We thank him for his dedicated service to his community. Our thoughts and prayers are with his family.”

Apple has not officially confirmed that the items in the truck belonged to it, or given any indication of what they are or were. In all, a very sad story. We send our condolences to those affected.