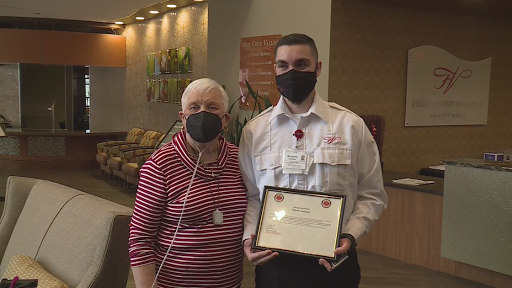 FENTON, Mo. Feb 10 2021– A woman says she owes her life today to a security officer who helped her escape an apartment fire.
She said that she was very afraid but happy that she survived a fire at a home for seniors in Fenton.
Friendship Village resident Gloria King says it could have been a disaster.
She lives alone and she’s on oxygen.
About eight weeks ago, she had a kitchen fire. Before she could even get worried or scared a hero showed up at the door.
On the afternoon of Dec. 12, the day of a drive-thru Christmas parade for so many who are so isolated in this COVID-19 pandemic, security officer Brandon Soehngen was just getting to work.
King was enjoying chocolate chip cookies that had just come in the mail. She put the box on the electric stove without realizing she bumped it and turned a burner on.
“I turned away and then yelled ‘Oh my gosh! Fire! Fire!’” she said. “It went up fast and the boy and I just grabbed my cookies and ran.”
The security officer said as he was walking through the door of the facility, the fire panel was going off,” Soehngen said. “Our manager looked at me and tells me there’s a fire … she’s on oxygen so that could have been a lot worse.”
Soehngen ran straight for her room, grabbing a fire extinguisher, putting on PPE, then putting out the flames.
“He came quickly. He put out the fire. He got me out of the apartment quickly before I hardly knew what was going on,” King said.
Late Tuesday afternoon, Fenton firefighters gave Soehngen an award plus a gift card and commemorative coin for his actions. Though he was just doing his job, he admits the residents make him feel like he’s working among friends.
It’s more than that now for Gloria King who can’t wait for the pandemic’s end so she can reward Soehngen with a hug and maybe one of those cookies.