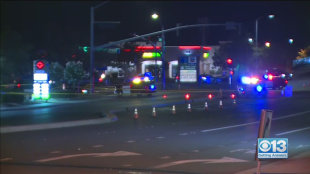 SACRAMENTO, Calif. July 7 2020— A man suspected of shooting and killing a person at a convenience store in North Highlands was himself shot by a security guard who tried to thwart the attack.

The shootings happened in the early-morning hours on Sunday at a convenience store in the 4500 block of Watt Avenue, according to the Sacramento County Sheriff’s Office.

Investigators say the incident started as a physical fight earlier in the day on Saturday. The unidentified victim and the suspect, 53-year-old Eugene Pratt, got into a fight at the store. Sheriff’s investigators say Pratt returned to the store after 1 a.m. and shot the victim multiple times.

Deputies arrested Pratt after a short investigation. While he was being arrested, deputies discovered that Pratt had been shot once in the lower body. He was taken to the hospital to be treated. His condition was not released.

It is unclear what led to the initial fight. The identity of the victim will be released pending notification of next of kin.

If you have any information about this incident, you are asked to call the sheriff’s office at 916-874-5115.