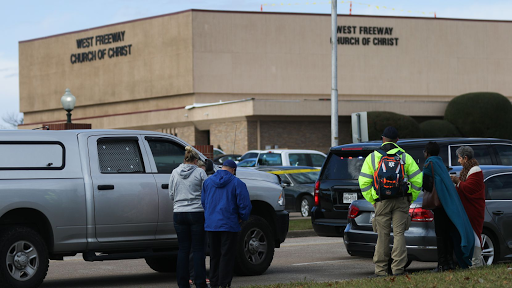 A Tarrant County grand jury Monday declined to indict a volunteer security officer for a White Settlement church who fatally shot a man who killed two parishioners during a Sunday service.

Jack Wilson fired one shot at Keith Thomas Kinnunen, stopping the 43-year-old gunman seconds after he pulled out a shotgun and shot Anton “Tony” Wallace, 64, and Richard White, 67, the morning of Dec. 29 at West Freeway Church of Christ.

There were more than 250 people in the church at the time, officials said.

Tim Rodgers, a prosecutor in the Tarrant County district attorney’s office, said in a written statement that the office believes the grand jury made the right decision, noting that Texas law allows people to use deadly force to protect others from being killed or seriously injured.

“Mr. Wilson did just that,” he said. “He did it responsibly and, as a result, he was justified under the law in his actions.”

Wilson, who is running for a seat on the Hood County Commissioners Court, later wrote on Facebook that he was put “in a position I would hope no one would have to be in, but evil exists and I had to take out an active shooter in church.”

Local, state and national officials praised his actions, and those of other churchgoers, that morning, saying that they saved countless other lives.

“Today evil walked boldly among us,” Tarrant County Sheriff Bill Waybourn said. “But let me remind you, good people raised up and stopped it before it got worse.”

A 2017 law allows places of worship in Texas to have armed volunteer security forces, and they must tell their congregations if they plan to ban guns. Restrictions on carrying guns in churches, mosques and synagogues were lifted as a response to the 2017 Sutherland Springs church shooting, in which 26 people were killed and 20 others wounded.