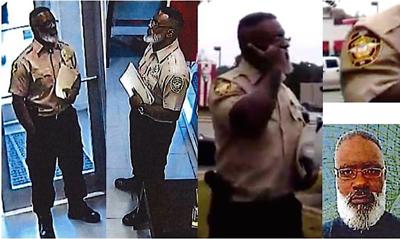 STOCKBRIDGE GA Sept 23 2019 Henry County Police are looking for an identity fraud suspect who was wearing a security guard uniform and openly carrying a sidearm when he applied for a $50,000 loan using what police say was a fake ID.

Several security camera photos show the man was wearing a short-sleeved, tan uniform shirt with law-enforcement-type shoulder patches, black tactical pants and black combat boots.
He appeared to be wearing a large watch or wristband on his left wrist and a holstered pistol was visible on his right hip.

The man also wore rectangular eyeglasses and had low-cut dark hair and a white or gray mustache and beard.

The allegedly bogus ID he presented the bank showed his hair, mustache and the goatee area of his beard as salt-and-pepper.