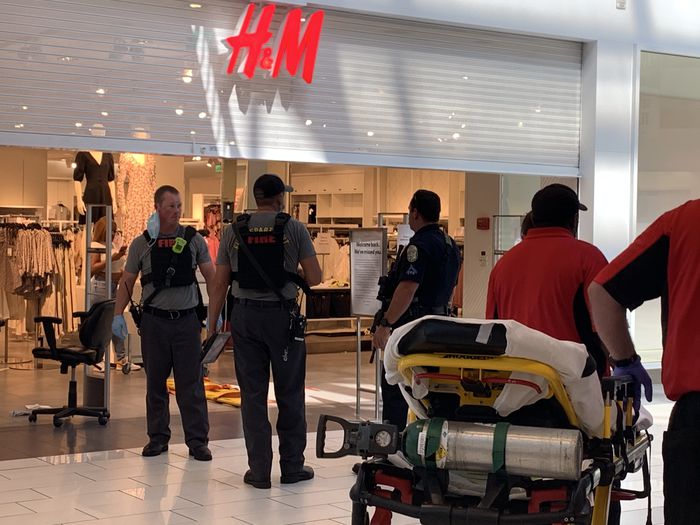 A suspected shootout inside the Riverchase Galleria in Hoover Friday afternoon killed a young boy, who was shot in the head, and injured three others, police confirmed Friday night.

The gunfire erupted at 3:18 p.m. on the first floor of the state’s largest mall. Among the injured was 8-year-old Royta Giles Jr. His mother did not want her name used, but spoke to AL.com about what happened.

The 8-year-old boy was transported to Children’s Hospital by a Hoover Fire Department rescue unit. He was pronounced dead shortly after his arrival at the Birmingham hospital.

Royta’s mother said she and her three children and the childrens’ stepfather were waiting to get into Children’s Place, a child’s clothing store. Because of COVID-19 precautions, the store only allows a certain number of people inside at a time. The mother said three people had just come out but since there were more of them, they had to wait for one more person to exit.

All of the sudden, shots rang out. “We heard the gunshots and I grabbed them and we hit the ground,‘’ she said. “When we all got up, he was the only one who didn’t get up.”

She said Royta just finished the second grade at Jonesboro Elementary in Bessemer. “That’s my baby, my firstborn,‘’ she said. Family members said he was energetic and always smiling. He had aspirations to become a rapper.

“To the people who did this, if I could say anything to them, it’s I don’t care about justice or anything like that,‘’ she said. “I wouldn’t say I’m religious, I would say I’m more spiritual, and the person who did this is going to have to answer for that whether it is to whoever they pray to or if it’s the streets.”

Hoover police Capt. Gregg Rector said officers responded to the mall at 3:18 p.m. after receiving multiple calls of shots fired inside the Galleria near the food court. He said they don’t yet know definitively what led to the shooting or how many gunmen were involved.

Bessemer City Schools on Friday night discussed the loss of Royta. School administrators have been speaking with the child’s family members and offer support as they grieve the sudden and difficult loss. “Our hearts are simply broken at the tragic loss of Royta. We are here for the family in every way possible, and we ask that everyone lifts the mother, family, and our school community in your prayers. This is tough,” said Bessemer City Schools superintendent, Dr. Autumm Jeter.

Royta was heading to the 3rd grade this fall. Jonesboro Elementary Principal Dr. Anjell Edwards and staff described him as a smart child, who was a jewel, with big dreams of someday entering the music industry. “He was bright, articulate, and very convincing. We even tried to convince him to become a lawyer,” says former assistant principal Mr. Van James.

Mayor Frank Brocato and Police Chief Nick Derzis held a press briefing Friday night. “After learning what transpired this afternoon at the Riverchase Galleria, I was heartbroken,‘‘ Brocato said.

The mayor praised Hoover police and firefighters for their quick response to the shooting. The Shelby County Sheriff’s Office, the Alabama State Troopers and Pelham police are among other agencies who responded to the Galleria. He said they treated the injured and contained the scene in a matter of minutes. “Our prayers go out to all of those affected by this senseless event.”

Brocato said he visited with Royta’s parents after the boy had been pronounced dead. “It’s a very senseless tragedy and of course they are devastated by this,‘’ he said. “I want to ask all of the citizens of Hoover and the metropolitan area to pray for this family, keep them in your prayers.”

“This is certainly a tragic situation when you have an innocent child who gets caught in the middle of an altercation between others,‘’ Derzis said. “Detectives continue their efforts to collect evidence and try to identify possible suspects. We’re currently following up on some very good leads and I can tell you we’re already making progress. We will use every available resource to our disposal to make sure that we solve this senseless crime.”

Jefferson County District Attorney Danny Carr arrived later at the shooting scene. “This is another unfortunate incident involving young people and guns and at some point we’ve got to get a handle on it,‘’ Carr said. “They don’t understand the ramifications of their actions.”

The Riverchase Galleria will remain closed Saturday, according to a press release issued by the mall. “We are heartbroken by the tragic, senseless incident that took place in our shopping center this afternoon.”

Police are reviewing surveillance tapes but also are asking any witnesses to come forward.

Danno Allgrove says he was shopping with his mother at the Torrid clothing store inside the Riverchase Galleria when gunfire rang out Friday afternoon.

“We were in the middle of talking to one of the staff members about one of the dresses and then there was a loud bang followed by at least five other small bangs,” the 28-year-old Vestavia Hills resident said.

“Immediately after the gunshots, the Torrid staff worked very quickly and efficiently to get everyone to the back of the store, to the emergency area, and they kind of kept everyone calm until they heard other people were being let out.”

As Allgrove and his mother made their way to their car to leave the mall he says they saw several officers in front of The Children’s Place, a children’s store. He said he saw a child laying in a pool of blood on the ground with an officer applying first aid to stop the bleeding.

“There was an officer applying first aid and compress to stem the bleeding,” he said.

A trail of blood leading to the South Parking deck also was found. The trail stopped at a curb, leading authorities to believe someone got into a car.

The galleria has been the scene of several high-profile shootings in the past few years.

Emantic Fitzgerald “EJ” Bradford Jr. was shot and killed Thanksgiving night 2018 inside the Galleria by a police officer who was responding to a shooting. The shooting set off a wave of protests. State officials later announced the unnamed Hoover police officer was justified in the fatal shooting.

On June 26, 2019 Hoover police and firefighters responded about 1:30 p.m. to the fifth floor of the North Parking Deck. When they arrived, they found a man inside a vehicle suffering from a gunshot wound. He was pronounced dead on the scene.

“You know, senseless violence is not limited to the Riverchase Galleria or Hoover, Alabama,‘’ the mayor said. “This type of incident is something we’re seeing across the nation. It’s really become a commentary on our society as a whole. I’m confident our police department will find those who are responsible and we will bring them to justice.”