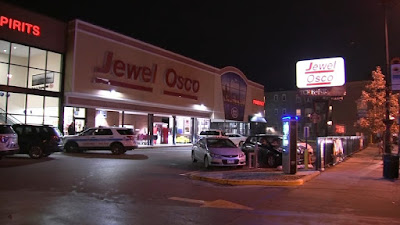 A reported shoplifter is dead after a struggle with store security officers and employees.

It all happened at the Jewel-Osco store, 3531 N. Broadway, about 6:45 p.m. Wednesday and police say that this is an ongoing investigation.

As onlookers gathered around the checkout area of a Lakeview East grocery store Wednesday night, one customer who took video of part of the confrontation said three employees detained a man suspected of shoplifting, including one large man lying for a time on top of the man, who later died.

Surveillance video shows employees brought the man to the ground and handcuffed him after his “being held down for a couple of minutes,” then brought to his feet, according to a police source. The man was taken to a security office where he passed out and eventually died, the source said.

An autopsy on the body of the man, whose identity had not been made public Wednesday afternoon, was inconclusive and pending further information, according to the Cook County medical examiner’s office.

The man “became combative with the store security who had attempted to detain him,” police spokeswoman Kellie Bartoli said in an email.

The man had “store merchandise” in a bag and he was seen “walking past the point of sale, at which point he was detained,” she said.

After dozens of shoppers witnessed the struggle between the man and store employees, he was handcuffed and “escorted” to a security office, officials said.

The police source said the man was handcuffed and “slumped backward,” when officers arrived. They looked for a pulse and couldn’t find one. At that point, they took off the man’s handcuffs, called paramedics, and tried unsuccessfully to revive him.

Jacob Velasquez, 32, is a neighborhood resident who was shopping when he heard a commotion and decided to call police and record what he saw. By the time Velasquez saw the confrontation, the man was pinned on the ground by a man wearing a Jewel uniform, who Velasquez estimated weighed about 400 pounds.

“There were two Jewel employees in black shirts standing and there was a man on the ground,” Velasquez said by phone Thursday.

“Then finally they handcuffed him.”

The police source said there was surveillance video showing the man was held down on the floor for more than a minute. The man was later walked away from where he had been detained, Velasquez said.

When asked about what Velasquez and others saw, a store representative said, “two co-workers assisted the security guard at this time, who put handcuffs on the subject and escorted him to the security office to call 911.”

Lake Stevens Man Dies After He Was Tased By Everett Police