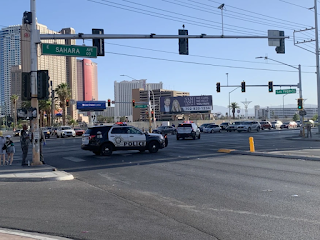 Police confirm three people have been shot including a security officer.

Police say that just before 6 p.m. a person tried to steal a sweatshirt from Bonanza Gifts and was confronted by security.

The suspect then shot one of the security guards according to the police.

The suspect was also shot during a struggle with the security guards. Police were not able to say whether security shot the suspect, or they shot themselves during the scuffle.

Police do have a suspect in custody.

Local media is reporting that a female theft suspect and a security officer were wounded in the shooting in the parking lot of a landmark Las Vegas Strip souvenir shop.

Bonanza Gifts, advertises itself as the world’s largest souvenir shop.