Shoplifter tussles with LP agent and uniform security during escape 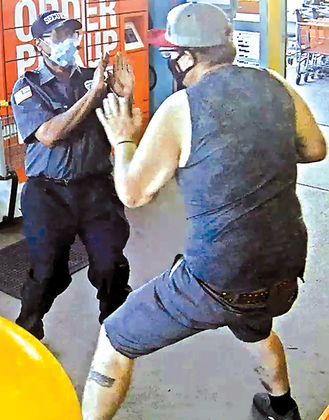 According to Spokane County Sheriff’s Office spokesman Cpl. Mark Gregory, detectives are looking for information related to a 7 p.m. Aug. 20 commercial robbery at The Home Depot.

Responding deputies learned a man who entered the store at 5617 E. Sprague Ave. had caught the attention of a loss prevention employee.

She observed him put several items in a basket as he peered around to see if anyone was watching him, Gregory said, noting the man walked past cash registers and out the door without paying for items.

The employee, wearing plain clothes, walked next to the man as he exited, the report said.

“Suddenly, the male bolted toward the parking lot with the merchandise,” Gregory said. “She reached out and grabbed the handle of the basket, but the male kept his grasp and pulled hard, swinging the employee in a circle.”

After letting go of the basket, the suspect ran past a uniformed security employee, out the door and to an awaiting four-door Kia, Gregory said. The silver-colored car was on the other side of the parking lot and the man got into the back seat on the driver’s side.

The vehicle then sped off, he said, noting the car is believed to be a silver 2005 Kia Spectra with an Idaho license plate.

The suspect is described as a white, approximately 5-foot-9 to 6-foot tall, weighing 220-250 pounds, Gregory said. He has several tattoos on his lower legs and inside of his right forearm.

Anyone with information that can help investigators identify the man or provide any additional information is asked to call Crime Check at 509-456-2233, reference case No. #10109831