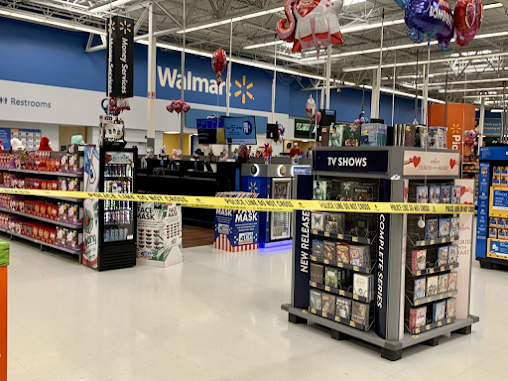 Trussville AL Feb 3 2021 Gunfire erupted inside the Trussville Walmart midday Tuesday, but no injuries were reported.

Sgt.  Adam Filetti said it appears the incident began with an altercation between employees at the store located off Trussville Crossings Parkway. One employee – a female – called someone up to the store during the dispute and that’s when the situation escalated.

He said investigators are still trying to sort out the details of what happened. It was just before noon when the two shots were fired inside toward the front of the store.  The initial scanner traffic labeled the unfolding incident as an active shooter situation.

Police have detained a possible suspect and the victim, he said. “We’re unsure who fired the shot,’’ he said. “It wasn’t the first employee, but it was either another employee or the person who came after.”

Officers had a portion of the store cordoned off with police tape. They also were processing a car in the parking lot for evidence. That sedan is being towed from the scene.

Filetti said it fortunate no one was injured. “It could have been a lot worse,’’ he said. “We’re grateful the two individuals kept it between them.”

Business at the busy store was never interrupted. “I don’t think all of the people in the store even heard the shots,’’ Filettis said. “So, it was business as usual. It was very quick.”