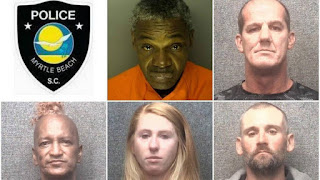 Police are looking for a man who reportedly fled the Wal-Mart Neighborhood Market at 3915 N. Kings Highway Sunday evening after a store clerk said he tried to pay $4.80 for a cart full of items valued at more than $129.

The clerk said she was watching the man ring up items at a self-checkout stand, but her monitor was only registering multiple items valued at 24 cents each. The man’s shopping cart contained milk, dressing, sliced turkey, cheese, body sprays, frozen food, salad, cake, body wash, dog food, yogurt, Gatorade and an energy drink, according to an incident report, but the items were not on sale for 24 cents.

When he was confronted, the clerk says the suspect left the store in a silver, two-door car, leaving the groceries behind.

The suspect was described as a white man in his 20s with a medium build, short hair, wearing a black and yellow shirt, jeans, a black jacket and white shoes.

Myrtle Beach police are also looking for a white man in his mid-40s after a security guard at the 541 Seaboard St. Wal-Mart said he tried to leave the store with seven knives concealed in his clothing. No other description of the suspect was provided in a police report.

The man fled the store as security tried to lead him back to the loss prevention office late Sunday night, according to the report. The chopping knives, valued at a total of $74.37, were not recovered, police say.

Thirty-five-year-old Brian Joseph Schaeffer Jr. wasn’t as lucky after he was caught hours earlier placing a Kidizoom Camera toy under his jacket before trying to leave the same Wal-Mart store, according to a police report. The almost $40 toy was recovered and Schaeffer was charged with shoplifting.

A 23-year-old Coastal Carolina University student, Carina Frey, was arrested and charged with shoplifting after a security guard at Belk told police he saw her go into a men’s fitting room where he recovered several tags around 6 p.m. Sunday. The guard told police he saw Frey select several pieces of merchandise, walk out of camera view and return with the items no longer in her hands.

The items, valued at nearly $283, were recovered from Frey’s purse, according to the report.

Twenty-nine-year-old Sarah Richardson was arrested and charged with shoplifting at the same Coastal Grand Mall Belk store around 8:30 p.m. on Black Friday.

A loss prevention officer told police he saw Richardson selecting items from the jewelry department as she was shopping with her toddler. The officer said that Richardson had placed three items on top of her baby stroller before getting her makeup done at the store.

Richardson “purchased makeup from the department but did not put the jewelry items on the counter to pay for them,” according to the loss prevention officer in the police’s report.

Fifty-three-year-old Warren Lee-Deangelo Williams was charged with shoplifting on Saturday after police say they found him drinking one of two Four Lokos and eating a bag of chips, all allegedly stolen from the 1100 N. Kings Highway Circle K around 4 p.m.

A clerk at the Circle K told police that she saw Williams, who was wearing a suit and tie, place the Four Lokos in his pockets and visit the chip aisle before leaving the store. Williams was found with the items in the Myrtle Market parking lot.

Shane Nur Bacchus, 58, of Myrtle Beach was charged with shoplifting after police say he swiped a Charlotte Observer newspaper from a bundle at the Walgreens drug store, 300 S. Kings Highway, early Sunday morning.

And George Allen Rix, 49, of Myrtle Beach was also charged with shoplifting at the Seaboard Street Wal-Mart on Sunday. The report of that incident was not immediately available.