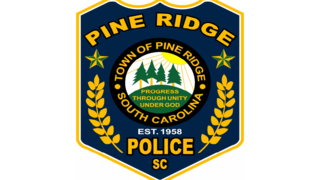 COLUMBIA, S.C. Dec 1 2020— Situated in the southeast of Lexington County near where Interstate 77 ends at Interstate 26, the town of Pine Ridge has a small police department protecting its population of 2,000 people. At most, the town would normally have three full-time officers on staff, supplemented by part-time officers.

But Pine Ridge has been without a functioning police department since Oct. 13, when Lt. Vincent Silano, the town’s interim police chief and only serving full-time officer, resigned after only five months on the job. Silano is the fourth chief to step down in the last three years, and five other officers have left in the same time span.

“It has created a hostile work environment for not only myself but my two part time officers as well and it will not be tolerated,” Silano wrote. “Since it does not seem that anything can be done regardless of the knowledge of wrongdoing, I have no choice but to resign from my position.”

At a contentious town council meeting Nov. 10, Wells said the town faces challenges in retaining personnel similar to what other small towns face.

“We have Lexington and different towns offering a $10,000 cash bonus just to walk in the door,” Wells said. “We have no tax base. Nobody in this room or in this town has paid a dime (in taxes) for police in this town. All the money comes from franchise fees and business licenses.”

Wells told The State he had two main disagreements in the department. One was the decision to suspend the town’s K9 officer program. Wells said a K9 unit wasn’t really needed in Pine Ridge.

“In town, the number of calls for a canine were zero,” he said. “Everything was mutual aid calls to other municipalities.”

The other came over Wells’ insistence that an officer police the school zones around Pine Ridge Middle School and Herbert A. Wood Elementary School at set times.

The mayor reiterated that turnover in a town like Pine Ridge tends to be high, and officers leaving is not a sign that anything is wrong.

Town Councilwoman Beth Spires Sturkie said the council was dependent on information about the police department’s operation from the town’s public safety committee — a two-person body that oversees the department, made up of Wells and Mayor Pro Tem Daniel Davis.

“I would prefer to have information from both parties when issues come up,” Sturkie said. “I’d like to hear directly from the officers. … I don’t feel like we need the middle man.”

During the Nov. 10 meeting, Sturkie proposed removing Wells from the public safety committee. The motion failed 3-2, with Davis, Wells and Scott Simms voting against. Sturkie was supported by Floyd Dinkins.

“If we make a change, and we continue to have resignations, then we know it was not Mayor Wells,” Dinkins said at the town council meeting. He argued some action would be needed “to regain the trust and respect of the people of this town.”

“Micromanaging is a management style,” Davis said. “It’s not my style, but it is a style.”

Citizens in Pine Ridge have protested against Silano’s resignation and the department’s turnover rate. Resident Judy Cooper said she collected 200 signatures from residents asking for Wells to resign over the issue. Wells said the town council has not seen the petition.

“They’re used to getting a quick response from somebody who will come in and talk to you personally,” Cooper said of the town residents. “I still don’t feel comfortable going to the store at night, and I used to.”

All the recent resignations tell a similar story, with a string of former chiefs sharing complaints with the Lexington Ledger about the mayor, elected in 2017. The complaints range from a strict patrol schedule set by the mayor to accusations the mayor and others have driven the department’s unmarked patrol cars around town.

Wells told The State he believes that allegation stems from when a department vehicle, a pickup truck, that was parked at his home after a fire at the town hall. He said an officer drove the car to the home and then drove it back.

Wells said he suffers from a spinal stenosis that makes it difficult for him to walk. “I can’t get myself into the truck,” he said.

Wells said he believes the criticisms of him are politically motivated.

He said he welcomed any state agency taking a look at how Pine Ridge operates, and said a previous investigation by the S.C. Law Enforcement Division into allegations of financial mismanagement in the police department was recently closed without any charges of wrongdoing being filed.

“I don’t look good in orange,” the mayor said. “I’m not going to be breaking any laws for anybody else.”

The State’s efforts to get in touch with Silano and other former Pine Ridge officers who had served under Wells were unsuccessful.

Billy Parker was Pine Ridge’s police chief from 2011 until 2017. He described Wells, who previously served on the public safety committee as a town council member, as a “wannabe policeman” who would do ride-alongs with officers on the beat.

“Mayor (David) Busby mostly kept him off my back,” Parker said. Busby was the mayor of Pine Ridge until 2017, when he lost to Wells in a write-in campaign.

But Sturkie, the town councilwoman, worries the high rate of turnover could impair the department’s ability to hire the best candidates going forward.

“Even if the applicants we get are qualified, it’s hard not to think they’re not already concerned about what they will face when they get here,” she said.

Parker has similar concerns. “Anybody in their right mind would not work there,” Parker said. “They’ve seen it’s short-term. If you leave a department for that job and then get fired or resign, you’ll be lucky to get another job.”

The town will hire an outside firm to evaluate candidates for Pine Ridge’s next police chief, after a council vote Nov. 10.

One former Pine Ridge police chief, Keith Parks, was named the new police chief in Marion in late September, but resigned just six weeks after taking the job. In a Facebook post on Nov. 18, the city of Marion said it received allegations of misconduct on Nov. 12 from the S.C. Criminal Justice Academy dating back to Parks’ time in Pine Ridge, which he left at the end of April.

“City officials were told the SCCJA received the misconduct report from the Pine Ridge Department on October 30, six months after his resignation from their agency in April,” the city announced on Facebook.

The Marion Facebook post said that cities or agencies are required to report to the academy any misconduct by a current law enforcement officer that might lead to the officer’s certification being revoked. “It’s not known why the allegations against Parks were not reported in a timely manner,” the statement said.

Documents obtained by The State from the Criminal Justice Academy show Wells reported on Oct. 30 that Parks had misled the Pine Ridge department when he was hired in December 2019.

Those violations came to the attention of Pine Ridge officials as part of a South Carolina Law Enforcement Division investigation into the town police, Wells said.

Wells’ memo to the Criminal Justice Academy indicated criminal charges could still be pending, but a spokesman for SLED said an investigation into misconduct allegations in Pine Ridge has concluded without charges being filed. The State has asked SLED for details of that investigation.

Wells told The State that information about Parks’ previous jobs only came to his attention as a result of SLED’s investigation.

“Like Marion, it seems the town did not do our due diligence as much as we thought we did,” Wells said.

Wells said neither he, nor the town administrator or the other member of Pine Ridge’s public safety committee, were contacted by Marion before Parks was hired. Calls to Marion’s city administrator have not been returned, but the city’s Facebook post said, “the Marion Police Department contacted Parks’ previous employer and City officials spoke with references who knew Parks both personally and professionally.”

In its submission to the Criminal Justice Academy, the town of Lexington said Parks had been terminated for “a violation of agency policy not involving misconduct.”

Complaints about how Pine Ridge handles its police department aren’t new. In 2018, after Wells had become mayor, former town patrolman Jonathan Carswell filed a lawsuit against the town alleging he was fired for writing a ticket to an unnamed individual connected to members of the town council. He also alleged his supervisor, then-Chief Eddie Powell, was demoted for refusing to carry out the firing.

Carswell separately sued Sturkie for allegedly defamatory statements made about him on social media. The cases were later settled out of court.

Sturkie told The State she couldn’t discuss the case due to the terms of the settlement, and attempts to reach Carswell were unsuccessful.

In the absence of any serving officers in the town, Pine Ridge falls under the jurisdiction of the Lexington County Sheriff’s Department. Since the town has such a small department, sheriff’s deputies already provided support when needed in the town, the department said.

“We have a long track record of providing law enforcement services to the residents of Pine Ridge in coordination with the town’s police department,” said Capt. Adam Myrick. “We’re committed to working with the town to ensure its residents and businesses stay safe and secure during the current transitional period.”

But town residents are worried about living in a town without a police department, and whether the sheriff’s department will be able to respond in time to calls. Resident Cheryl Patrick recalled meeting Silano at a neighborhood watch meeting after neighbors had spotted a prowler in the area at night.

“It felt like he had a vested interest in us and a passion for his job,” Patrick said. “He said he was ‘this close’ to catching the guy. … I felt a lot safer.” She’s not heard whether anyone was caught.

Speaking to the town council Nov. 10, Patrick said she hoped the town got its police department sorted out soon.

” Barney Fife would be better than nobody,” she said.