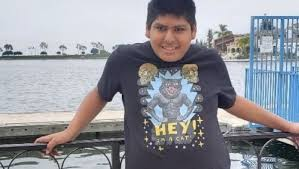 ORANGE, Calif.  September 13 2019 Students at an Orange County high school are demanding answers after one of their classmates, a student with special needs, died from injuries sustained after crashing a security guard’s golf cart on the campus.

Dozens of students at El Modena High School walked out of class Thursday morning to protest the death of 15-year-old Emanuel Perez, known by many as Manny.

The 15-year-old died from “major” injuries he sustained after crashing the golf cart into a pillar, according to the Orange Unified School District.

Specific details on the crash have not yet been released, but the school district says he was under supervision by a one-to-one aide at the time of the incident, and that others tried to stop him unsuccessfully when he got on the golf cart.

Those who knew Manny are not satisfied with the district’s explanation.

“Many of us know who the aide is, many of us known what happened,” Alice Rodriguez, a 12th grader at the high school said. Rodriguez claims that there was no “one-on-one aide.”

Manny’s family is also demanding answers as to how the incident happened, saying that the school can’t simply say that it was an accident.

The school is working with law enforcement to determine how the accident happened. A letter was sent to families of the high school, which reads in part:

“Our top priority as a district has always been to ensure the safety, health and well-being of those we are privileged to serve. More than anything, we owe it to our students to provide them with safe and supportive campuses that cultivate learning.

This tragic accident has devastated our community, and we continue to gather the facts. We will work closely with our law enforcement partners as they complete their investigation into the circumstances of this accident.”