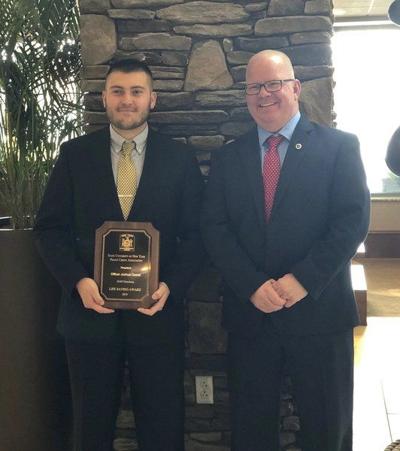 “I just saw somebody who was in trouble and needed help, and I went and tried to help,” Coons said.

“Luckily for both of us, it worked out.”

Coons went into the near-freezing river last November to save a man that had fallen into the water near the University Police Station.

The Ellenburg native, a five-year veteran of the University Police force, was recently awarded a 2019 Police Life Saving Award by the SUNY Police Chiefs Association at a ceremony in Saratoga Springs on Nov. 12 for his actions.

“I was incredibly grateful for it,” Coons said.

“It meant a lot to be recognized on a state level. It was really amazing to go down and meet other guys from around the state who were getting the same award.”

And for University Police Chief Patrick Rascoe it was a point of pride in an officer he’s watched grow under him.

“It made me proud to be able to nominate an officer who did something that is truly heroic, and then have them be recognized for it by the commissioner’s office,” Rascoe said.

And while the award and praise for his actions has been nice, Coons said that the reward truly came from getting to save a fellow human being.

The man, who Rascoe and Coons said suffers from mental health issues, came and thanked Coons for his actions about three months after the incident, and has thanked him on other occasions since.

“That meant the most to me,” Coons said. “To know that he treats it as a second chance at life.”

And while there was some risk to Coons’ efforts, Rascoe has a hard time faulting him for the decision he made.

“That one of my police officers jumped into a near-freezing river without flotation and whatever, and the risks involved; I understand that,” Rascoe said.

”I absolutely understand that, but nobody else was there. I was there, Josh was there, and this individual would have died within moments of when Josh went in the water.”

By the time Rascoe and Coons responded to the report of the man in the water that cold November night, the man was losing grip on a tree in the middle of the river that he had been holding on to.

Coons was able to swim to the man and get him into waist-deep water where others at the shore assisted the rest of the way.

The rescue has also prompted the department to update its training protocols, utilizing training from State Forest Rangers to prepare themselves for if this situation happens again.

“We are by no means swift-water rescue experts, but we do have the ability now to safely bring somebody in,” Rascoe said. “We always need more tools to address problems, and this is just one more.”

Those tools include a rope and life jacket in every University Police vehicle and at the dispatch station, as well as training about how currents can affect water rescues.

Coons may have his mom’s influence to thank for the successful rescue, though.

“I took swimming lessons as a kid,” Coons said.

“My mom was adamant that I go. I wasn’t always the most excited to go to those lessons, but they paid off.”