Support pours in for security guard 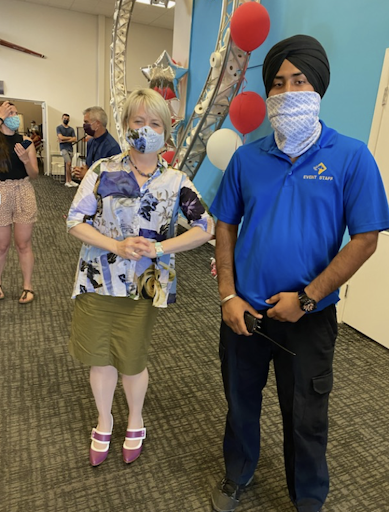 Canadians from across the country have been sending messages of support to a Kelowna security guard who suffered a racist tirade from a protester outside a COVID-19 immunization clinic.

Video of the incident has been shared widely through social media. It shows a COVID-19 protester verbally harassing Singh outside of Trinity Baptist Church on July 13.

“Move back to your country,” he says. “You’re disgusting. Go back to India. We don’t want you here. You’re not a Canadian.”

The guard remains composed and firm as he holds his ground trying to move protesters away from the building.

The company’s tech team is working with the guard to help him lock down his accounts, and the company has created a safety plan in case the flood of attention turns negative.

A dozen protesters were outside of Trinity on July 13 for about six hours in a demonstration so intense Davis said Paladin had to rotate its staff to deal with the verbal attacks. Davis, who has been in the security industry for 30 years, said he’s never seen any protest activity “to this level.”

“We are vilified by this particular group,” he said, noting it’s mainly because they are tasked with enforcing the health guidelines that protesters so vehemently oppose.

“People are tired of racism and bullies,” he said.

Davis said he regularly asks protestors to be respectful, and he added that guards are there for the protesters’ safety, too.

“This has sent shockwaves through the Indo-Canadian community in B.C.,” she said. “This is not Kelowna. This is not who we are. This is not how we want people to perceive us.”