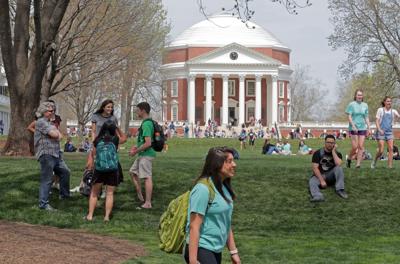 About one-quarter of undergraduate women say they have been victims of sexual touching or penetration without consent since starting college, according to a survey this year on sexual assault and misconduct at 33 major universities.

The survey released Tuesday was the second from the Association of American Universities in recent years to document the disturbing prevalence of sexual violence at prestigious public and private schools. A 2015 study involving many of the same universities found broadly similar patterns of sexual misconduct.

Officials said there was a bright spot in the findings: Evidence that growing numbers of students understand what sexual assault is and where a survivor can get help.

Even so, the data show, most victims refrain from contacting offices dedicated to providing aid. Among their most common reasons: a belief they could handle the situation themselves, that they did not consider the incidents serious enough, or that they felt embarrassed or ashamed.

“The results provide cause for both hope and continued concern,” AAU President Mary Sue Coleman said in a statement. “They reveal that while students know more about university-sponsored resources for victims of sexual assault and misconduct, they still aren’t using these resources often enough.”

The survey showed that 25.9 percent of female undergraduates had experienced nonconsensual contact through physical force or because they were unable to give consent. For male undergraduates, the share was 6.8 percent.

“The rates are still high — too high,” Coleman said.

This year’s survey, conducted with the research firm Westat, was described as the largest of its kind.

Of about 831,000 students invited to answer a confidential online questionnaire, more than 181,000 responded. The response rate was 21.9 percent. Responses were weighted to reflect demographics of each institution.

Researchers analyzed whether and how much the survey results were skewed because those who chose not to answer might have had different experiences or views — a phenomenon known as “nonresponse bias.”

Skeptics say surveys have overestimated the extent of sexual violence in colleges. But the AAU study found “little evidence” that nonresponse bias could explain the high rates of victimization found in the 2015 and 2019 surveys.

David Cantor, vice president of Westat, estimated that such bias could tilt the findings of nonconsensual sexual contact among undergraduate women by two to three percentage points.

Studies in recent years have gauged the prevalence of sexual assault at colleges. In 2015, The Washington Post and the Kaiser Family Foundation found through a national poll that 20 percent of young women who attended a residential college in the previous four years said they had been sexually assaulted.

1 in 5 college women say they were violated.

Educators say the latest findings from AAU underscore the importance of initiatives to educate students about prevention of sexual violence.

University of Wisconsin officials said the survey showed the share of undergraduate women who experienced sexual assault at the flagship Madison campus was about the same as the average for other schools. The university also found that awareness of the issue has grown since 2015. In recent years, it expanded training on sexual violence prevention for students, faculty and staff.

“We are committed to doing all we can to ensure a safe living and learning environment for all of our students,” Rebecca Blank, the university’s chancellor, said in a statement. “Reducing sexual violence at UW will require changes in behavior and culture as well as ongoing investments in resources and the campus environment. All of us need to understand the importance of consent, watch for warning signs and be willing to intervene.”

At U-Va., where the findings on sexual assault among undergraduate women were also comparable to the survey average, officials said they were heartened by data that showed students appear to trust the university’s handling of the issue more than they did four years ago. In 2015, the university said, 59 percent of students surveyed thought it was very or extremely likely that a report of sexual misconduct would be taken seriously by U-Va. Now, the share is 72 percent.

In 2014, U-Va. was rocked by allegations in a Rolling Stone magazine article that a female student had been the victim of a gang rape and that the university was indifferent to the episode. But the allegations unraveled after discrepancies emerged in the woman’s account, and Rolling Stone retracted the article. Then as now, U-Va. maintained that it takes all reports of sexual violence seriously.

U-Va. officials cite several recent efforts regarding sexual violence prevention. Among them is a program called “Hoos Got Your Back” — Hoos is a shortened version of the Wahoos nickname — to encourage students who witness a potentially problematic situation to intervene before it escalates.

Catherine Spear, associate vice president at U-Va. for equal opportunity and civil rights, said the university aims to deepen outreach to students vulnerable to sexual violence. “Yes, we’ve made progress,” she said, “but we recognize there’s always more progress to be made, and we know that. It’s not a ‘once and done.’ ”

For the University of Oregon, officials said the survey results appeared to show modest reductions in the prevalence of nonconsensual sexual contact compared with four years ago. Darci Heroy, the university’s associate vice president, chief civil rights officer and Title IX coordinator, said students also appeared to have a better understanding of how to seek help after an incident, and a higher percentage said they thought university officials would take reports of unwanted contact seriously. (Title IX is a federal anti-discrimination law.)

Heroy said she was particularly encouraged to see an increased sense of trust and willingness to report problems to the university. “It feels different on campus,” she said. “There’s not nearly as much of a sense of tension around these issues. We’re moving past some of the mistrust we had several years ago.”

Data from Georgetown, Harvard, Johns Hopkins, Yale and several other participating universities was not available in advance of the report’s release.

Georgetown officials say in recent years they have begun a five-hour training program for students in what is known as “bystander intervention,” and the survey indicates those efforts may be paying off. “It appears as though our students have an increased understanding of and comfort with intervening,” said Samantha Berner, Georgetown’s Title IX coordinator.

Twenty-one of the participating schools also took part in the 2015 AAU survey. Within that group, researchers said, the results suggested slight increases in the prevalence of sexual assault among undergraduates and among women seeking graduate or professional degrees.

Researchers found sizable increases in knowledge about sexual assault and misconduct among undergraduates. Forty percent of men and 37 percent of women at the 21 schools said they were very or extremely knowledgeable about the definitions of those terms at their school — both up about 12 percentage points in four years.

The survey also shed light on sexual harassment at universities. About 19 percent of students at all participating schools reported experiencing sexual harassment that interfered with academic pursuits or created a hostile environment on campus. Women in graduate and professional programs who were sexually harassed were far more likely than other victims of harassment to point to a faculty member or instructor as the perpetrator.