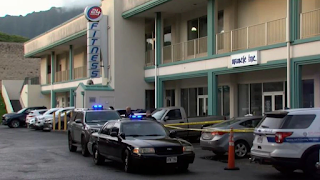 HONOLULU HI December 7th, 2022 Police are searching for a suspect after a Windward City Shopping Center security officer was brutally stabbed Tuesday morning and subsequently died at the hospital.

Police said the incident happened on Kaneohe Bay Drive near the 24-Hour Fitness at around 5:40 a.m.

The victim was seated in his vehicle when a suspect approached him and stabbed him multiple times, police said. Authorities said the suspect then fled the scene.

Honolulu Emergency Medical Services said the victim suffered stab wounds to his neck, chest, arms and abdomen. Paramedics treated and transported him in critical condition to the hospital, where he was later pronounced dead.

The suspect is described as a heavy-set Hispanic, mixed man in his 50s.

He was last seen wearing a black shirt with a hoodie, black pants and a black hat.