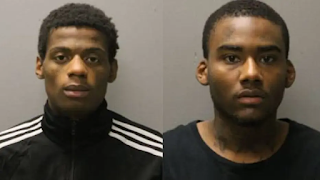 Chicago IL November 20 2021 Two men are facing murder charges in connection with the deaths of an armored car security officer and of two of their alleged co-conspirators in the attempted robbery, with Chicago Police Supt. David Brown calling the killings a “murderous spree” of violence.

According to Chicago police, Antoine Montgomery, 19, and DeAndre Jennings, 21, each face three counts of first-degree murder in the shooting deaths of three individuals, including a 47-year-old security guard who was shot six times when they attempted to rob a trio of guards that were loading an ATM machine in the Chatham neighborhood Monday morning.

According to police, the three security officers were loading an ATM at the Bank of America location in the 200 block of West 83rd Street at approximately 10:21 a.m. when a group of at least three men got out of a dark-colored vehicle, brandishing weapons.

A gun battle then ensued, with the 47-year-old security guard being shot six times.

A 46-year-old guard was shot twice and critically wounded, and a third guard returned fire, but did not strike any of the suspects, according to police.

The group then allegedly drove to a Boost Mobile store in the 6700 block of South Stony Island a short time later. One of the offenders then got out of the vehicle and robbed the store while brandishing a pair of firearms, stealing multiple cell phones.

At approximately 11:30 a.m., police responded to calls of a traffic crash and of shots fired in the 8700 block of South Saginaw. Once they arrived on scene, they found a vehicle that had struck multiple cars and slammed into a tree. Officers also found two individuals in the driver’s seat and in the passenger’s seat.

Both had been shot, and both were pronounced dead at the scene.

Chicago police believe that the two individuals were involved in the initial armored car guard shooting.

“There is no honor among thieves,” Brown said.

Residents observed two other suspects running into a residence near the location and called police. Officers then surrounded the home and kept surveillance while a SWAT team was called. The two suspects later emerged from the home and surrendered to police.

A long rifle, along with several other weapons and items of clothing, were seized by police at the home.

Brown and other officials praised Chicago police for their diligent efforts to solve the case and praised residents for acting quickly to alert authorities to the whereabouts of the suspects.

“We will not tolerate violence in these communities,” Brown said. “We will work around the clock to investigate these crimes.”