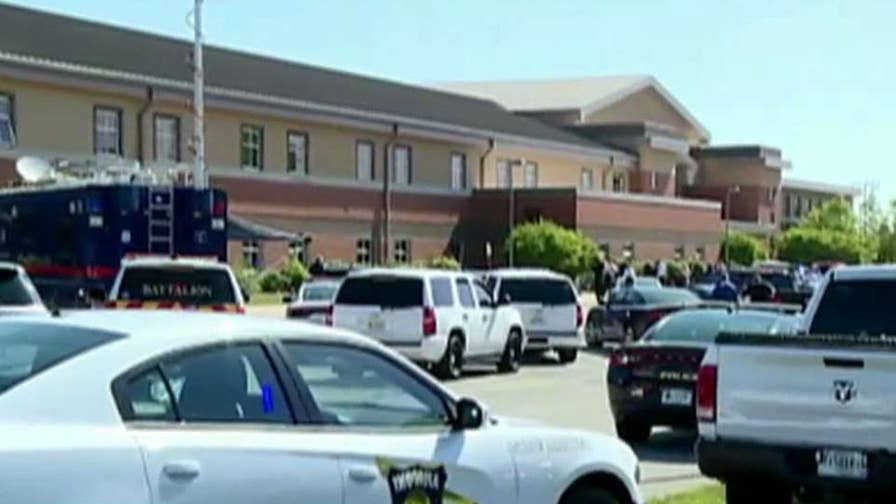 Noblesville IN May 27 2018 Indiana authorities on Saturday were yet to charge and identify the student who they say was responsible for wounding a teacher and student at a middle school in what media is reporting as the 23rd shooting on a United States campus in 2018.

The student, who was being held by police, was armed with two handguns when he shot a science teacher and another student in a science classroom at a Noblesville West Middle School on Friday morning, police in the community 25 miles (42 km) northeast of Indianapolis said.

Police said on Friday they were investigating the shooter’s motive and how he obtained the guns. They did not detail how he was stopped, but witnesses told local media that the teacher knocked the guns away and wrestled the suspect to the floor despite being wounded.

As of early Saturday, authorities had not identified the student or filed charges against him.

The shooting, by CNN’s count, was the 23rd in the United States this year and comes just a week after a high school student in Santa Fe, Texas, shot and killed eight classmates and two teachers.

The shooting incidents in 2018 on campuses across the nation have ranged from a teacher accidentally discharging a gun during a public safety class at a California high school, injuring a student, to a mass shooting at Marjory Stoneman Douglas High School in Florida that left 17 people dead, CNN reported.

The shootings have fueled debate about how to keep campuses safe.

“Here we go again … I wish I had an answer,” Indiana State Police Superintendent Doug Carter said to reporters. “It’s another sad day.”

The suspect in Friday’s shooting had excused himself from class and came back armed with the pistols and opened fire in a science class, authorities said. Police apprehended him in the classroom.

A police guard at the school responded to the shooting, and other law enforcement officers arrived within minutes, police said in a statement.

The wounded teacher was identified as Jason Seaman, 29. The unidentified girl was in critical condition at an Indianapolis hospital, police said.

Seaman’s mother, Kristi Seaman, said on Facebook that he was shot through the abdomen, in the hip and in the forearm and was doing well after surgery.