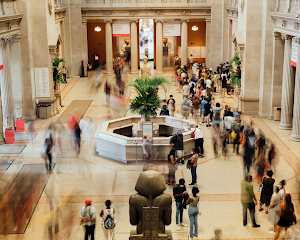 New York City NY Jan 12, 2022 The Metropolitan Museum of Art has agreed to increase the salaries of its security guards, part of an effort to ease staffing shortages that have arisen as the institution is buffeted by the effects of the coronavirus pandemic.

Like many businesses, health care facilities and cultural organizations, the Met has struggled in recent weeks with employee absences, at times closing multiple galleries to cope with a security staff reduced, on the worst days, by as much as a third because of illness.

On one day in early January, for example, some 80 of the museum’s roughly 430 galleries were closed, including rooms displaying medieval, Egyptian, Chinese, European and American art and objects.

But while the immediate staffing issue is largely related to the surge of the highly contagious Omicron variant, the museum has also had a longer-term problem hiring guards to rebuild its staff after layoffs in 2020 that came in response to the pandemic.

In August 2020, five months after it had closed its doors and as the financial impact of the pandemic deepened, the Met furloughed about 120 guards who worked at the main museum on Fifth Avenue or at two satellites, the Met Cloisters and the Met Breuer. Those guards were later laid off, the museum said.

Since then, the Met has hired back dozens of those guards, and said recently that it had openings for 40 more. But like many service-oriented organizations and businesses, it has also encountered an unusually competitive labor market that has made attracting job candidates more difficult.

Until last month, guards starting at the Met had been paid $15.51 an hour, just above the $15 minimum wage for fast food workers in New York state. Now guards are paid a starting wage of $16.50 as part of an agreement with Local 1503 of District Council 37, which represents guards and maintainers at the museum.

“The hiring issues are largely based on pay,” said Freddi Goldstein, a spokeswoman for District Council 37, which is involved in continuing contract negotiations with the Met. “We’re working with the museum and we’re helping to bring those rates up, but certainly pay has been an issue over time.”

The wage increase comes as several museum employees said the morale of some guards had sunk because they felt worn out and undervalued while working in often difficult circumstances. Last month, several nonunion employee-run groups within the museum, including one called the Collections Care Group Leadership Team, sent a letter to Daniel Weiss, the Met’s president and chief executive, and Max Hollein, the Met’s director, saying, “We recognize that our union colleagues feel unappreciated and unseen.”

The Met’s main building on Fifth Avenue is now served by a staff of some 300 full-time guards versus the 404 that had been assigned there before the pandemic, museum officials said. They added that the decrease had been partially driven by the fact that the museum is not open as many hours as before and by a new way of deploying guards that emphasizes targeted patrols over stationary posts.

Still, officials at the Met said they hope that the higher wages would help with hiring and noted that they stood by their workers when the museum closed in March 2020 by keeping all employees on the payroll for months.

“I’m enormously proud of our collective staff,” Weiss said by telephone. “They have stepped forward to protect the institution and preserve our mission.”

Under the new wage agreement, existing guards who were being paid $15.51 an hour were given raises and are now being paid $17 an hour. District Council 37 said that average pay among guards at the museum was around $20 an hour.

The new rate places the Met ahead of the American Museum of Natural History, where guards, represented there by its Local 1306 of District Council 37, are paid $15.51 an hour to start. Entry-level guards at the Museum of Modern Art, represented by 32BJ S.E.I.U., a local chapter of the Service Employees International Union, are paid $21.65.

As the Omicron variant spread in recent weeks, other museums have experienced staff shortages because of illness.  For example,  the Smithsonian’s National Air and Space Museum in Washington is closed until later this month, and its National Museum of Natural History, was closed briefly amid a shortage of visitor services staff but has now reopened.

In New York City, where record numbers of Covid-19 cases have been reported, the Met has reduced its visitor capacity. Anne Canty, a spokeswoman for the American Museum of Natural History, said its galleries had remained open except for the museum’s Butterfly Conservatory, which has been closed for several weeks because of shortages among specialized employees and volunteers.

Amanda Hicks, a spokeswoman for the Museum of Modern Art, said that, while some employees had been out because of the impact of Covid, no galleries had closed.

Until recent weeks, the number of galleries closed at the Met on Fifth Avenue had been more modest, though the closing of any one section has the potential to disappoint a visitor. Dan Nazzaro, for instance, traveled to the museum from Parsippany, N.J., on the Saturday after Thanksgiving, when two European Sculpture and Decorative Arts galleries were closed, as well as several in the American Wing.

Nazzaro said he had visited specifically to view an American Wing gallery displaying an 18th-century cabriole-leg Massachusetts settee and other furniture. But on this day it was cordoned off with a rope and a sign that read “temporarily closed.” Gazing at the objects inside, Nazzaro said he wished that the museum had used its website to list gallery closings in real time.

Museum leaders have said they are confident the Met’s staff, visitors and collection continued to be safe, even as staff shortages became more pronounced in early January. Regina Lombardo, the Met’s chief of security, said in an interview that the museum had determined that it was more effective to assign guards to patrol and move them from place to place, sometimes based on information from cameras, than to always keep them at fixed posts.

But a larger staff was still in order, museum officials said, although fewer guards of late appear to be calling in sick. The Met said it had just hired seven new guards and planned to hire more. Lombardo said she believed the pay increase would help accomplish that, adding: “We’re fishing in a bigger pond.”