Three charged with murder in stabbing of London security guard 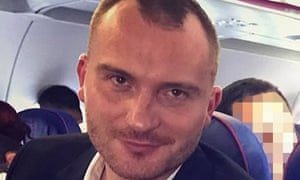 London England Jan 31 2019
Police investigating the killing of a security guard who was stabbed to death as he tried to stop people gatecrashing a New Year’s Eve party in London have arrested three men.
The men, aged 20, 23 and 25, were are all charged with the murder of Tudor Simionov, 33, who was working at the private event in Park Lane when he was attacked and killed in the early hours of the new year.
Two of Simionov’s colleagues and a man and woman were also stabbed during the incident. They have all since been released from hospital.
The 20-year-old suspect is being treated for injuries after a police raid early on Tuesday at an address in Brent, north-west London. Scotland Yard said he was “detained by a police dog” after jumping from a window and attempting to run away.
The 25-year-old was arrested after presenting himself at a central London police station on Monday night. The third man was arrested in Hammersmith, west London, and was charged with violent disorder as well as murder.
Detectives are still appealing for information to help trace two other suspects: Ossama Hamed, 25, and Nor Aden Hamada, 23, who are both described as dangerous. Images of both men have been released by police.
A 25-year-old man was previously charged with violent disorder in connection with the case. And a 26-year-old woman was charged with perverting the course of justice.
DI Garry Moncrieff, who is leading the investigation, said: “The three men will now be questioned by investigators. However, we will not stop until we have apprehended all those who have played a part in Tudor’s murder.”
He described the suspects Hamed and Hamada as “dangerous individuals who need to be apprehended”.
Moncrieff added: “I would urge anyone who has seen them, or knows of their whereabouts, to contact police immediately.
“These are live lines of inquiry, therefore I am not willing to speculate on where they may be, but rest assured we are working with colleagues to ensure that if they are in this country, or overseas, we will track them down.”
Anyone who sees Hamed or Hamada is urged to call the police immediately on 999.

After Simionov’s murder, his girlfriend Madalina Anghel said the couple had come to London from Romania looking for a better life.