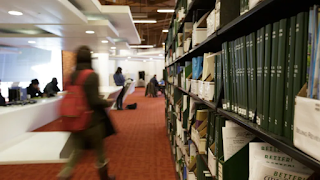 Toronto Canada October 25 2021 As the Toronto Public Library looks to hire significantly more security guards at branches across the city, library workers say it’s not enough to curb the widespread harassment and violence they face daily.

The guards enforce COVID-19 rules such as wearing masks, manage lineups and patrol the building, says a staff report to the board. They also help library workers de-escalate tense situations with clients, which according to a recent survey are on the rise.

But Brandon Haynes, president of the Toronto Public Library Workers Union, said while security guards are integral to protecting the safety of staff and clients at the city’s 100 branches, library workers need far more support from management to prevent hostile incidents from happening in the first place, protect their own wellbeing and recover from trauma.

“They’re feeling a lot of burnout. They’re feeling that they’re not being heard,” Haynes said. “And at this point, enough is enough. Let’s treat this as a major crisis not just a reactive response.”

Library workers call him daily, struggling to cope with “psychological scars” from their experiences on the job, Haynes said.

“We’ve had people spat on. We’ve had people punched,” he said. “We hear a lot from workers who feel neglected. They don’t feel the support I think they deserve as library workers for the City of Toronto.”

CBC News spoke to four Toronto library workers who described clients making racist comments and threatening them and their colleagues with sexual violence and weapons, including knives, and lashing out violently when they’re asked to wear a mask. Their experiences are similar to three other librarians CBC News interviewed earlier this month.

Christie Paschakis, a branch head at a west-end library and the union chair, said she and her predominately female staff face verbal abuse and sexual harassment on a daily basis and “more serious” aggressive behaviour weekly.

“There’s that tendency for customers to feel that they can intimidate you more, that they can push the envelop because you’re a woman,” said Paschakis, who’s worked in the library sector for more than 20 years.

“It’s not nice to have to be consistently dealing with a lot of that kind misogynistic tendency and sexism.”

Library worker Jinkie David said she and her colleagues often feel on edge because this kind of abuse can happen at any time on a shift.

“It is very triggering because you don’t know when the next incident will come,” said David, who also serves as a health and safety rep for the union. “Unfortunately, sometimes they’re back-to-back. There is no time to escape.”

Toronto Public Library’s human resources head Brian Daly said in a statement that all violent or harassing incidents are “completely unacceptable.” But he also indicated that — as libraries welcome everyone and operate in a “complex and turbulent world” — challenging situations will inevitably arise.

“This isn’t new for libraries but the world is getting more complex and that impacts libraries like all other public-facing organizations,” said Daly.

“As such, we recognize that incidents between patrons, or between patrons and staff, will continue to occur despite all efforts to reduce and eliminate them.”

He said library workers get in-depth training to deal with rule violations, including dispute and conflict resolution, and management works with the union and health and safety committees to support staff and keep them safe.

“While any incidents are too many, and our goal must always be zero incidents, we have seen some positive impact of the efforts we have undertaken in the past few years,” Daly said.

Haynes and the other library workers CBC spoke to are calling for higher staffing levels — hoping for “safety in numbers” as David put it. They also say they need more mental health supports and recognition from management that in highly stressful situations, training isn’t always going to work and they still experience harm.

Toronto Public Library’s most recent data is from 2019, when it documented 248 violent incidents, about the same as the year before, but more than double those reported in 2016. That’s about 1.4 violent incidents per 100,000 visits, a rate that’s remained consistent over the years, staff note in their report.

But incidents are likely underreported, and some staff are deterred from documenting their experiences, said Haynes.

He added that more timely data would better demonstrate how the pandemic has driven up violent incidents and harassment.