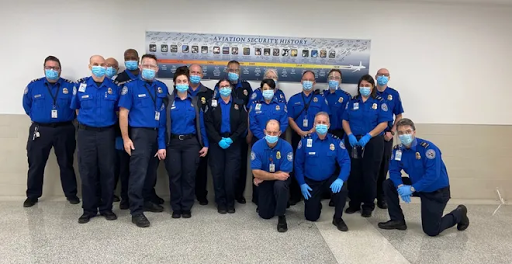 Akron OH Dec 26 2020 Efforts to improve operations helped the TSA crew at Akron-Canton Airport gain recognition as one of the best in the country by the Transportation Security Administration.

After reviewing results of the 2019 federal employee viewpoint survey, members of Akron-Canton TSA team decided to make changes to improve the workplace.

Workers launched a campaign, dubbed “It Starts With Me,” to promote personal responsibility and began to address the survey by using continuous improvement procedures.

TSA employees were encouraged to participate in the annual survey, and more than 80% responded. That led to a focus group that addressed concerns in four categories.

As part of the “It Starts with Me” campaign, coworkers reaffirmed their oath of office. The campaign included periodic discussions and team activities promoting personal responsibility.

A communication board was created in the break room, a committee provided ideas for the scheduling process, and a software upgrade recommendation for screening technology was implemented, which impacted approximately 75 airports nationwide.

“During the pandemic, this team of professionals used focus groups to have periodic discussions and team activities to promote personal responsibility by every member of the organization. I appreciate their hard work, professionalism and commitment,” Don Barker, TSA Federal Security Director for Ohio, said in a press release.

“Their team can be consistently counted upon to assist CAK Airport with day-to-day security matters,” Camacho said. “What an exciting way to honor their duty to customer service, accountability, and work ethic, especially given these turbulent times over the past year.”