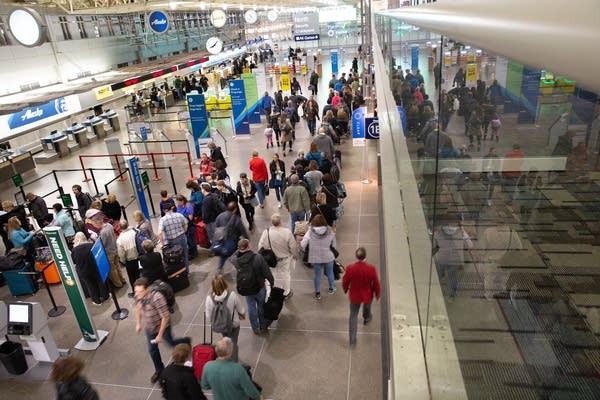 Minneapolis MN October 31 2019 The newest checkpoint at the Minneapolis-St. Paul International airport is closing down, airport and federal officials say.

The screening area is on the skyway between the InterContinental Hotel and Terminal 1.

The Transportation Security Administration said the hotel checkpoint will close on Nov. 18.

Clifford Van Leuven, federal security director at U.S. Department of Homeland Security, said the number of passengers going through the checkpoint “does not justify continued deployment of TSA staff,” according to an Oct. 17 letter.

“From our standpoint, we need to do something about the congestion in the Terminal 1 ticketing lobby. We’ve invested in these security checkpoints, and the TSA needs to staff them,” Hogan said.

The checkpoint is open to all travelers, not just hotel guests, with carry-on luggage but is only open from 5:15 a.m. to 10 a.m. It opened with the hotel in August 2018, then closed in December and reopened again in April.

Metropolitan Airports Commission Executive Director Brian Ryks said in a letter to the acting head of the U.S. Transportation Security Administration that the closure “contradicts TSA’s commitment, prior to the opening of the hotel and the $24 million skyway connecting the hotel to the terminal, that it would staff a public hotel checkpoint.”

Ryks also criticized the TSA for staffing some Twin Cities airport checkpoints “irregularly or not at all.”  The Oct. 23 letter notes that the checkpoint on the skyway between C and G concourses is staffed from 5:30 a.m. to 1:15 p.m., and was completely closed for “a number of months this year.”

Minnesota Sens. Amy Klobuchar and Tina Smith also have asked the TSA to meet with Twin Cities airport officials and to consider reopening the hotel checkpoint.

TSA officials did not immediately respond to a request for comment.