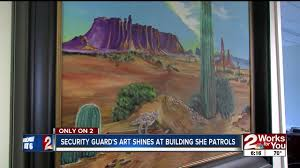 TULSA, Okla. April 4 2019— You never know what people are really about until you get to know them.

That’s the case with rose, a Tulsa security guard, who’s put raising a family and being a caretaker ahead of her talent.

Rose’s work now has a prominent place alongside works from other international artists.

Most everyone that comes through the door at the bank of America tower knows exactly who Rose is, but they what they may not realize is what her true passion is.

No one gets by the front desk without Rose saying hello or helping with directions.

Sitting still is hard for her, so Rose keeps busy with what she loves most.

She’s drawn since she was little girl, but Rose’s husband recently died after a battle with cancer.

The friendly faces she sees every day at the front desk knew she was suffering during that time and several asked her to draw and paint for them.

“We kind of gave her a distraction, something that she could come back to that she used to do and love and sort of escape the hardship when you’re losing a loved one,” CEO of Olifant Energy Don Burdick said.

He’s always appreciated original art, long before he could afford it.

“Started my job in Midland, Texas, had a mattress on the floor,” Burdick said. “I bought a used piano and I bought two paintings from a starving artist.”

His collection has grown since then.

Work from artists all around the world line the hallways of Don’s office.

Don had seen Rose doodling and made a special request in honor of his new company, he didn’t expect what she came back with.

“Did a draft of an elephant colored it, handed it to him and asked if that’s what he wanted,” Rose said.

It was in fact. Rose’s work now hangs center stage.

Anything with animals in it, don ordered up more of rose’s art..

Rose says painting is her medicine and the money she’s made here and there helped pay the medical bills.

“My husband had cancer, that’s how I was paying for his chemo,” she said.

Rose’s latest work, a series of angels, with all of the money made going to help children fighting that same dreadful disease that took her husband.