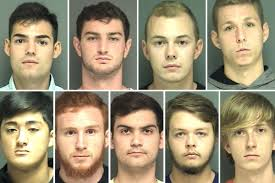 Twelve men have been now been arrested over a string of alleged statutory rapes of underage girls at Jacksonville State University, police have said.

The men range in age from 18 to 22-years-old, with 11 of them facing charges of second-degree rape, and one is charged with sodomy in the second degree.

The investigation by police led to the first nine arrests during a two-day span in mid-September, with the latest arrests taking the number to 12.

Several of the suspects are students at the school, NBC News reported.

They are accused of having sexual encounters with two underage girls over a course of several months at or near the school in Jacksonville, Alabama.

Investigators said earliest contact between the girls and the group of men was in January.

Nine arrests were made during a two-day span in mid-September, including (left to right) Daniel Ralph George, 18; James Lyle, 19; Christian Lane Homesely, 19

Brandon Reece Barton, 19 is charged in connection to a series of underage rapes at an Alabama school

Avory Triston Cosby, 20, was arrested as part of string of underage rapes

Investigator Jay Harrington of the Calhoun-Cleburne Major Crimes Unit says the alleged victims are between 12 and 16.

However, Bill Broome, an attorney for one of the defendants told WBRC that one of the alleged victims portrayed herself as a 19-year-old on social media.

He said: ‘This is just wrong to label these young men as rapists and potentially have to register as sex offenders.’

Broome went to tell WBRC that his client is the real victim and believes the girl should face charges.

But attorney Roger Appell told the station: ‘The fact that she lied about her age on Tinder on Facebook is of no consequence.’

Jacksonville State University attorney Sam Monk told NBC: ‘The girls were making contact through social media connections and then coming onto our campus or adjacent to our campus to meet these individuals.’

He said at least three of the individuals arrested had no link to the school.

University police are increasing patrols of campus security and in another layer of safety, students are now required to show proof that they are a resident before entering a residence hall, ABC 33/40 reported.

An emergency board meeting of trustees was held on September 21 after campus police were alerted to six statutory rapes.

The school added in the statement: ‘We as an institution and as a community are committed to maintaining a secure and trusted campus environment for our students, employees, visitors and guests, and we will continue with appropriate vigilance and campus-wide education.