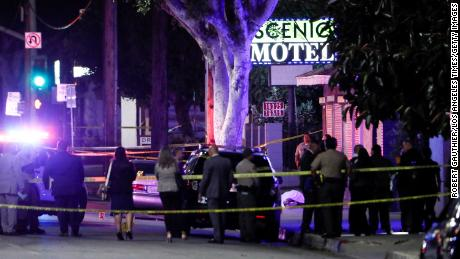 The two officers had been called to the intersection of Garvey and Central avenues, where the shooting happened just after 5 p.m., according to Deputy David Yoo, a spokesperson for the Los Angeles County Sheriff’s Department.

The Sheriff’s Department was assisting El Monte Police with the investigation.

The city of El Monte confirmed both officers had died in a Tuesday night statement. Their names were not immediately made public.

“There are no words to describe our grief and devastation by this senseless act as we learned about the passing of two of our police officers. It weighs heavy on our hearts and we are sending our support to their families. We would also like to thank the El Monte community and our surrounding government agencies for the outpouring support we have received in the last few hours,” said a statement from the city, the Police Department and the El Monte Police Officers Association.

The suspect was “down” at the scene, Yoo said.

A body covered by a sheet could be seen at the scene; and broadcast reports said that was a suspect who had been killed.

Police and sheriff’s deputies swarmed the area of the shooting and appeared to be searching a nearby building, possibly a motel. Another suspect also appeared to be in custody in a patrol vehicle on the scene.

” The El Monte Police Department responded to a possible stabbing at the Siesta Inn and officers immediately took gunfire upon arrival,” the city statement said.

TV helicopter coverage showed family members of the injured officers were at LAC+USC Medical Center, where the officers were taken after the shooting.

Arthur Kingsbury, a life-long resident of the area, was driving west on Garvey Avenue on his way home from work when he said he heard five gunshots go off. Initially unphased, he continued driving until he heard 10 more gunshots, he said.

“I whipped my car into the parking lot and got out of my car when I saw the suspect, a male with no shirt, lifeless on the ground,” he said.

Kingsbury saw a pistol be picked up off of the suspect, he said.

Alex Garcia, a 20-year resident of South El Monte, said he saw what he thought was the end of a pursuit before the shooting broke out. He said incidents of this magnitude are not common for the community.

“It doesn’t get like this, with people getting shot and shooting at the cops,” Garcia said. “The community’s changed a lot (since I’ve lived here); it’s gotten a lot chiller.”

“I’m completely devastated to learn about the shooting of two of El Monte’s Police officers. Details are still being investigated and reported. During my tenure as mayor, I had the opportunity to get to know many of them. I broke bread with them, celebrated their heroic feats and watched as many safely made it to their end of watch. Please keep these officers in your prayers,” said former El Monte Mayor Andre Quintero, who served from 2009 to 2020.

The shooting comes one day after a California Highway Patrol officer was shot multiple times during a traffic stop in Studio City. The CHP officer remained hospitalized Tuesday and a suspect was in custody.