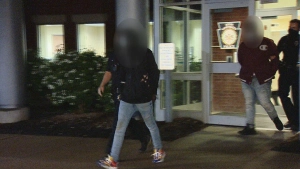 ROSS TOWNSHIP PA May 31 2021 An afternoon of shopping on Saturday turned into a terrifying ordeal when thousands of people rushed for cover after a fight between teens at Ross Park Mall led to gunfire.

Two 17-year-olds were taken into custody by police following the incident.

Their faces have been blurred due to their age.

Police tell KDKA the juveniles will be charged as such and cannot say if they were linked to the shots being fired inside of the mall at this time.

Witnesses told police they heard around three shots, but officers will search for shell casings open the mall floor to confirm that information.

Despite the chaos, no one wound up injured in the fight or while racing out of the mall to safety.

Shoppers who spoke to KDKA say they were relieved to have safely made it out of the building.

Police say they are at a tactical and investigative disadvantage because Simon won’t install cameras.

Instead, police will rely on the big box store’s surveillance cameras and information from eyewitnesses.

KDKA has reached out to Simon to inquire about the camera issue, but have not yet heard back from them.