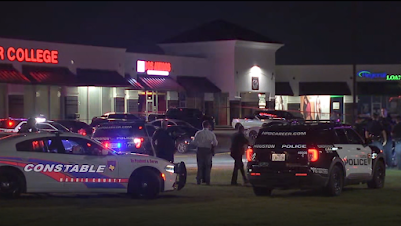 HOUSTON TX October 16 2021 – One deputy with Harris County Constable Precinct 4 is dead and two other deputies were injured after a suspect reportedly ambushed them as they were responding to a disturbance outside of a bar.

The incident happened at the 4400 block of North Freeway at around 2:15 a.m. Saturday morning.

HPD Executive Assistant Chief James Jones said during a news conference that the three deputies were working as security officers at the 45 Norte Sports Bar and Lounge when two of the deputies heard a disturbance outside.

The deputies believed a robbery was occurring and attempted to take a suspect into custody. That is when police believe they were ambushed by a man with a rifle from behind.

Houston police, who are leading the investigation, say all three were rushed to Memorial Hermann hospital at Texas Medical Center. One deputy was confirmed dead.

At this time, Pct. 4 says they do not plan to release the names of the three deputies.

Exec. Asst. Chief Jones said they have a person of interest in custody, but it was unknown if the person was the suspect or a witness.

“I’m asking for all our community’s thoughts and prayers for our families.

My main concern right now are the families of the three officers involved and getting them the immediate care and support that they’re going to need,” said Harris County Pct. 4 Constable Mark Herman.

“We’ve mobilized our victims assistance and we will be given them the support over the next couple of days.

I want to thank the Houston Police Department for briefing me on everything that occurred at the scene, thus far.”