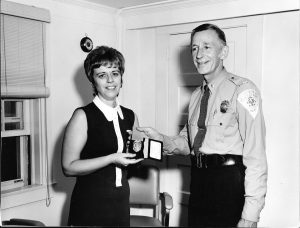 Storrs CT May 10 2022 Since its earliest days, UConn has always had various groups of people working to ensure safety at the Storrs campus – sometimes as “watchmen,” later as security officers, and most recently as sworn police personnel.

This spring, UConn marks the 50-year anniversary of legislation that transformed its Security Division into the UConn Police Department, bestowing the same authority as other police agencies and expanding access to training and recruiting.

While the department’s scope has grown in that half-decade, including expanding its presence at the regional campuses, it’s always remained true to its credo: to serve the unique needs of its campuses, adapting to the changes in public safety nationwide and UConn’s culture in particular.

“Every community has its own nuances and uniqueness, and our department has always emphasized the need to understand and evolve with those changes,” says Hans Rhynhart ’93 (CAHNR) ’19 MBA, UConn’s associate vice president and director of the Division of University Safety, whose 21-year career in the department includes several years as police chief.

Past and current UConn officers and department leaders will gather later this spring at an event to mark the 50-year anniversary, including those who led the history research: Sgt. Dominic Nesci, Officer Timothy Juergens, and lieutenants Justin Gilbert and Matthew Zadrowski.

Nesci became interested in UCPD’s history when he applied and was hired in 2016, and jumped enthusiastically into the research project after a friend sent him a postcard from the 1970s. It showed a UConn mounted officer in front of Koons Hall, part of the unit that patrolled on horses from 1973 to 1980, and again from 1990 to 1993.

Nesci’s research took him to the Archives & Special Collections at the Dodd Center for Human Rights, leading to endless hours of reading old news articles, Board of Trustees meeting minutes, archives of the Daily Campus and Nutmeg yearbook, and other sources.

He also talked and met with many UCPD retirees and others who shared their memories and donated old items they’d had at home or in storage, many of which may eventually be housed in a permanent display at the department.

Like Rhynhart, Nesci noted that the information he gathered during the research reflected an agency that continually evolves with the times.

“I found that UConn’s Police Department was always very diverse and strived to be modern and progressive,” Nesci says. “UConn PD was always willing to try new programs such as mounted patrol, a motorcycle unit, community policing, and so forth.”

The UConn Security Division transitioned into the UCPD under legislation that received final General Assembly approval on April 28, 1972. The change went into law when Gov. Thomas Meskill signed the measure a few days later.

The change gave UConn officers the chance to gain more training, since they previously could fit into those classes only when another department had extra seats; and the authority to secure arrest warrants rather than continuing to go through other agencies.

It also gave the department more authority to handle issues in its jurisdiction without the potential that other agencies might be called in to supersede its authority without understanding the unique nature of campus policing.

The change was also predicted to make the agency more attractive to potential recruits and draw strong officer candidates – which it did, as the 40-person department grew over the years to accommodate the increase in student and employee population at Storrs and other campuses.

For about the first 50 years since UConn was founded in 1881 at the Storrs Agricultural School, campus safety under the purview of “watchmen” – which were, as far as historical sources suggest, certainly predominantly male and possibly completely so.

In 1940, the Connecticut State Police tasked Trooper Leland Cable with organizing a security force on campus, creating the Security Division that operated until the UConn Police Department was established in 1972.

Nesci and others have not yet been able to find documentation about the first female on the Security Division, or whether any of the earlier “watchmen” had female counterparts with similar authority.

However, old news clips say at least one female officer was on the Security Division before 1966, when Willimantic Police Officer Jane Tirone joined the division; and 1970, when Lois Knapp was sworn in as the third woman in the department.

The department’s first officer of color was Edward Marshall, who joined as a security officer in 1969 and transitioned into a police officer in 1972 when it became an official agency.

Although today’s duties are more complex and UConn Police serve a larger population than ever before, that doesn’t mean the jobs of the security officers and watchmen were uneventful; quite to the contrary.

One night in April 1906, for instance, a night watchman spotted what The Hartford Times called “a gang of burglars” trying to break into the administration building around 2 a.m. to steal the Connecticut Agricultural College’s treasury.

Having noticed damage a few days earlier to one of the building’s windows, the watchman and the professor who handled the college’s accounts were lying in wait behind a tree with a loaded rifle. They confronted the men and were quickly dodging bullets when the would-be burglars opened fire and ran into woods.

The professor fired shots from his Winchester and they rang the college bell to rouse students for a search party; whether the burglars were ever caught seems to have been lost to history.

A watchman also saved the day in November 1917, spotting a fire that destroyed the school’s first chemistry lab building. The fire would have also demolished an adjacent larger building if not for the watchman’s quick action to ring the alarm, rousing students to set up a bucket brigade.

And in March 1962, UConn security officers were vital to securing the hectic scene of a single-engine plane crash on Horsebarn Hill, where the plane had been pulling a banner advertising a student government election. Miraculously, the pilot’s injuries were found to be minor and he was treated at the campus infirmary and released.

The community has also strongly supported the police department over the decades. For instance, private citizens and groups raised funds to buy the mounted patrol unit’s three horses, saddles, bridges, medicine, vitamins, and other items when it went into effect in 1973.

Alumni have been connected with the UCPD since even its earliest days. Many of the officers over the decades have been alumni, including several like Rhynhart who have made it their career. Today, more than a dozen officers are UConn alumni, including lieutenants Zadrowski and Gilbert; Deputy Chief Andrew Fournier; and several others.

“We’ve found that having a blend of people with life experiences both here and elsewhere has helped us create a well-rounded workforce,” Fournier said in 2019. “UConn is an exceptional state agency to work in, whether you attended this University or not.”