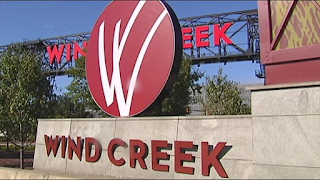 Authorities charged Rui Y. Li with trespassing and related offenses after being asked to leave the Bethlehem casino. Police said casino staff had evicted the 68-year-old New York City resident more than a year ago.

A Pennsylvania State Police trooper assigned to Wind Creek was walking the casino about 2:30 p.m. Wednesday, when he saw a security supervisor trying to escort Li across the gaming floor, according to the criminal complaint. Li allegedly struck the woman several times, according to court records.

Security was trying evict the patron because of her behavior and said she was “unwilling to leave.” Court records do not detail Li’s alleged poor behavior.

A translator explained to Li that she needed to leave, but police said she refused several orders to do so. When the trooper tried to handcuff her, Li allegedly refused and was carried to the state police office within the casino.

Once in the state police office, Li allegedly bit the trooper’s hand, spit throughout the office and proved “physically combative.” Police said additional restraints were required.

Security notified state police that Li had been evicted from the casino in September 2019, and a records check revealed that she’d been cited by police for trespassing two days later.

Court records show she does not have a fixed address. Li failed to post bail and was sent to Northampton County Prison to await a preliminary hearing tentatively scheduled for April 28.