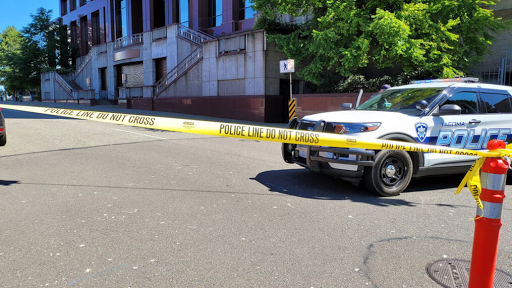 TACOMA, Wash. July 20 2021– Tacoma Police say they are investigating a homicide after a woman was found dead with obvious signs of trauma in downtown Tacoma.

Police say the woman, who is in her 40’s, was working as a security guard and was found dead by her co-worker. She was found at 9th and A Street around 6 a.m. Sunday.

These are not the kind of days law enforcement officers look forward to.

But caution tape and police lights give us an idea of how busy it was here.

According to Boyd, officers arrived outside this building this morning after receiving a call from a security guard who was about to start their shift.

“When the security guard arrived for her shift, they located their co-worker, a black female in her 40s, who had evident signs of trauma,” Boyd said.

When crews arrived, they determined the security guard died from that trauma, though police won’t say yet whether the guard was beaten to death.

“Perhaps,” Boyd said, “we’re uncertain right now, detectives are on scene trying to piece everything together.”

Hours after the initial call detectives were still combing through the scene, laying down evidence placards and doing what it takes to figure out what exactly happened here last night.

“The detectives keep all those investigative details close for due diligence for this victim,” Boyd said.

Sadly, tragedy not only struck this area of Tacoma but down at 56th and Pacific too.

According to TPD, a call came in around 3 in the morning for a disturbance and when officers arrived, a Hispanic man was on the ground and appeared to have been shot.

He was taken to the hospital and, unfortunately, died from his injuries. No suspect has been found in either incident.

“It’s tragic,” Boyd said. “It’s not like we’ve already dealt enough with the pandemic but that people are having to deal with being victims of crime right now.”