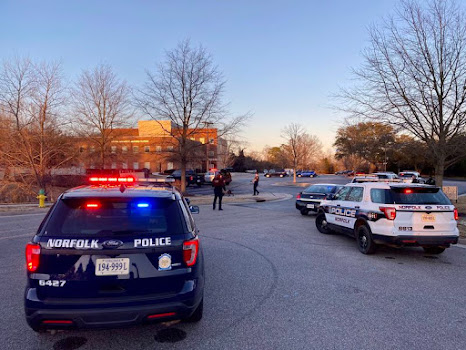 NORFOLK VA Feb 10 2021 — A Chesapeake man was arrested after a double shooting Monday afternoon at a Social Security Administration building in Norfolk, police said in a news release.

Police were called to the building, located at 5850 Lake Herbert Drive, around 4 p.m. about a “shooting in progress.” They found two men suffering from multiple gunshot wounds.

The security officer, an employee of Paragon Systems, was taken to Sentara Norfolk General Hospital with non-life-threatening injuries.

He had been shot three times including in the chest where his body armor stopped the bullet from penetrating further.

He is still being treated at the hospital and will be taken to the Norfolk City Jail when he is released.

Rankin has been charged with malicious wounding, shooting in an occupied building, use of a firearm and firearm by felon.

Around 5:15 p.m., a Norfolk Bomb Squad truck also arrived at the building.

Police said at 6:15 p.m. that Norfolk officers and “federal agencies” were continuing to investigate the shooting. Norfolk police didn’t specify which federal agencies were involved.

Officials also tweeted Monday that Norfolk police and federal agencies are investigating, and they are not looking for additional suspects.

They said Tuesday that the investigation is ongoing. Detectives have not released the motive surrounding the shooting.