Va. teen killed by exploding grenade that ATF says may have been purchased at N.C. thrift store 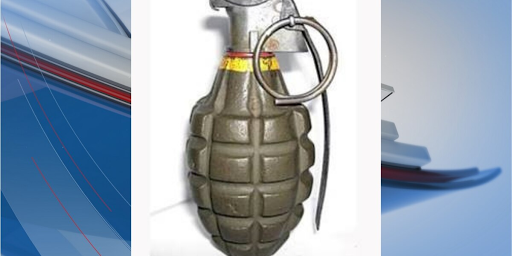 BRUNSWICK COUNTY, N.C January 10 2021 Agents with the Bureau of Alcohol, Tobacco, Firearms and Explosives (ATF) say a Virginia child was killed by an exploding grenade that may have been purchased at a thrift store in Brunswick County.

According to a press release, the ATF is asking for the public’s help to track down potentially-live grenades that could have been sold at the Fancy Flea Antique Mall, located off U.S. 17 near Shallotte, last summer.

“The grenades were thought to be ‘inert’ MK2 grenades, a style used during World War II. At the time of sale, neither the vendor nor buyer(s) believed the grenades to be functioning or hazardous,” the press release stated.

The agency is concerned the grenades may contain live explosives and could be dangerous.

ATF officials added that the antique grenade that caused the deadly Dec. 23 explosion in Abingdon, Virginia was likely purchased from the business in June.

Last month, ATF first announced they were looking for one potentially live grenade sold at the store during the same June time frame. The agency said new information indicated that more grenades were possibly sold from the same vendor.

“With vendors trying to recall sales from months ago and all-cash transactions happening during a summer season, an exact number may be hard to find. We know of the grenade that resulted in the fatal explosion and a similar style grenade that was sold around the same time that has yet to be accounted for. It’s probably best to say that there is the possibility of additional, similar style grenades being purchased that month,” said ATF public information officer Corey Ray.

ATF confirms it happened in Abingdon, Virginia, a town about an hour away from the North Carolina’s border.

Virginia State police were called to investigate the incident alongside Abingdon P-D.

WECT reached out to the Abingdon Police Department today for details on a young person who died as a result of an accident involving a grenade on December 23 and received this statement from the police department:

“The Abingdon Police Department is investigating the death of a 12-year-old juvenile. It occurred on December 23, 2020, at a residence on King Street. This is still an active investigation and we will release further information when it is available”

Our NBC sister station in the area, WCYB, says the 12-year-old boy who died in his home was Asher Hurley.

The Virginia state medical examiner’s office says the boy’s death has been classified as an accident due to penetrating injuries to the head and torso and extremities.

An obituary posted online describes the victim as a smart, reserved young man who loved to play drums and the guitar.

WECT has reached out to the family and have yet to hear back.

ATF is asking for anyone who visited Shallotte, near the Ocean Isle Beach and Holden Beach area, and purchased an “inert” grenade from the Fancy Flea Antique Mall in June 2020 to contact the Charlotte Field Division at 704-716-1800 or the Washington Field Division at 202-648-8010. Information can also be provided to ATF by calling 1-800-ATF-TIPS (800-283-8477), or by email at ATFTips@atf.gov, or through the ReportIt ® app.