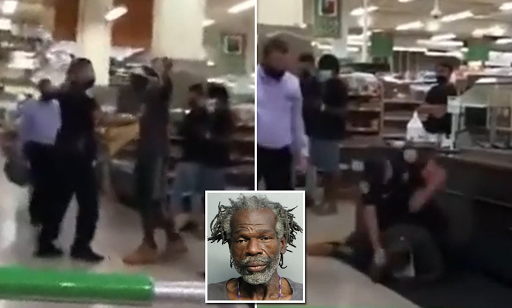 MIAMI FL May 3 2021 Cellphone video from inside of a Publix Supermarket in Miami captured the rough arrest of a homeless man accused of taking food without paying for it, but some said the officer who made the arrest used excessive force.

Video from April 16 captured the incident, which happened in the area of Biscayne Boulevard and Northeast 17th Street just before 7 p.m. The video was first obtained by the Miami Herald.

According to City of Miami Police, the homeless man is accused of stealing a piece of chicken from the deli and eating it while he was on his way out.

According to the arrest report, when the manager asked the man to pay for the chicken, he replied, “[Expletive], I am homeless. I don’t have any money.”

That is when a Miami officer working as a security guard on an extra shift at the supermarket asked the homeless man to come to the office. The homeless man then walked away.

Their exchange devolved into a beating and arrest inside of the busy supermarket, causing store managers to try to help out.

Those shopping at the time were left horrified.

“Oh, my goodness. That was just– he was just hitting that man in his head,” a woman said after watching the video. “I feel like as a society, we forget that we are human. He is doing something wrong, I guess immoral, but the aggression and the force that was used, things could’ve went differently.”

“It’s the excessive force that he did, all the punching,” a second woman said.

Willie Barbor, 58, was arrested on that day for petty theft, disorderly conduct and resisting arrest without violence.

“It looks like he’s beating him to death for a chicken,” a second man said after watching the video. “I would say [it’s excessive]. I would hate to be the damn chicken or the man.”

One man, who said he was homeless, was standing outside of the supermarket, Wednesday night. He added that he knows Barbor.

“I face this stuff everyday,” he said. “I don’t condone the stealing. However, come on, it was a chicken.”

The officer involved in the rough arrest, later identified as Alexander Garcia-Contreras, has been relieved of duty pending the outcome of the investigation, police said.

City of Miami Police Chief Art Acevedo was asked about the officer’s actions on Thursday.

“I am not going to talk or characterize,” Acevedo said. “I think the video speaks to itself. The fact that he’s off, been relieved of duty should tell you something, but we’re not going to investigate an administrative or, potentially, a criminal investigation involving a police officer in the media. We’re going to do our jobs, and we will report back to this community what the findings are and what the consequences are.”

However, according to John Veiga, this was not the officer’s first time using force during an apprehension. Veiga filed an internal affairs complaint against Garcia-Contreras after a rough arrest outside of a Wynwood nightclub in 2019.

“Cop comes from behind, sucker punched me on this side, pushes me against the car that was here, punches me twice more,” Veiga said. “He ran up to me. He just punched me without even asking what was going on.”

Veiga said the incident began with an altercation between himself and a security guard before the officer intervened. Veiga was arrested and charged with battery on a law enforcement officer.

“Officers are allowed to use force to gain compliance from a subject that’s resisting,” he said. “This incident happened weeks ago, and for the administration to just relieve him of duty yesterday, I think is a knee-jerk reaction and an overreaction to one video posted on social media.”

“This video is obviously very hard to watch. It’s true that homelessness in Miami is a challenging issue. It’s why we have outreach teams who work tirelessly to convince people experiencing homelessness to move into housing where they can access meals and mental health services, and ultimately, avoid these kinds of incidences altogether.”

7News has also reached out to Publix for comment, but have yet to hear back.