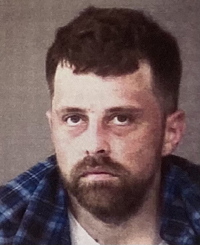 Shortly before 3 p.m. Wednesday, a man fled from courthouse security as they were trying to arrest him.

According to Kosciusko County Sheriff’s Office Capt. Travis Marsh, Ryan Prater, 33, of 653 Heritage Lane, Warsaw, was at the Kosciusko County Justice Building for a probation appointment when it was determined Prater was wanted on an active felony warrant for violating the terms of his probation.

Court security responded to take Prater to jail for booking, when Prater then fled from the court security officer in handcuffs and ran out of the Justice Building.

KCSO deputies and Warsaw police responded to the area, where Prater was located shortly after near the Zimmer Hotel, talking on a cell phone, using his shirt to hide his handcuffs.

Prater was booked in the Kosciusko County Jail at 3:21 p.m. Wednesday and hit with a Class A misdemeanor charge for resisting law enforcement.

According to court records, Prater’s probation violation stems from an incident on Feb. 2, 2020, when police responded to a call of him overdosing on heroin.

When officers arrived, Prater was unresponsive on a bathroom floor, and police located a syringe and spoon that tested positive for methamphetamine in the trash.

According to court papers, Prater told police he had used heroin earlier that day.

On May 4, Prater was sentenced to one year in KCJ for a Level 6 felony conviction for possession of methamphetamine; and 60 days for a Class C misdemeanor possession of paraphernalia charge.

On Nov. 2, Prater was given the rules of his probation and released, and a probation violation was filed in the courts Tuesday.

Prater’s bond for the felony probation violation charge was set at $5,250. His bond for resisting law enforcement was set at $750. However, he had his bond revoked  and is being held with no bond on the revocation charge.