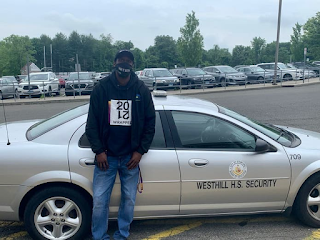 STAMFORD, CT June 5 2021— Thanks to some quick-thinking and a little bit of luck, Westhill High School security guard Keith Rosedom was in the right place at the right time.

Rosedom is being hailed as a hero for his actions last month that saved a man from getting seriously hurt, or worse.

On Saturday, May 8, Rosedom was in his security patrol car monitoring the lacrosse and baseball games in a back parking lot at WHS when something caught his eye.

A car started to roll inexplicably in reverse, and the driver, who had gotten out of the car to go exercise on the track, was trying to stop it to no avail.

“When I finally realized what was going on, I jumped out of the car,” Rosedom said.

The man fell to the ground and was dragged dangerously underneath.

Rosedom ran over to try and gain control. With the help of another student who was walking by, the two stopped the car and the man was able to get up and avoid further injury.

Rosedom was recognized during a Board of Education meeting last month for his heroic act. “It’s a good feeling, but it’s not really a big deal. I was just reacting. It happened so fast,” Rosedom said. “He could have gotten hurt badly, and another car could have been hit. There were a lot of people walking through the parking lot, too.”

“We are extremely thankful that Keith was in the right place at the right time and was able to move and think swiftly to avoid a potential accident where someone could have been hurt,” Della Flora said. “We appreciate his dedication to his job to provide safety and security but also his dedication to the community at large.”

Due to the COVID-19 pandemic, Rosedom might not have even been there to help at all.

Stamford Public Schools (SPS) was forced to cut several security positions from the budget last year because of the pandemic. Rosedom was laid off from his security post, and began to work as a paraeducator at Scofield Magnet Middle School.

But when SPS decided to come back to in-person learning in March, the Board of Education reinstated the security positions. Rosedom was recalled and returned to WHS shortly before the incident occured.

“Everything happens for a reason,” he said.

‹ When a thief stole $500 in diapers from a pregnant woman, Illinois policeman › Police arrest belligerent passenger on flight at Jacksonville International Airport