Woman with no boarding pass refuses to leave Delta plane 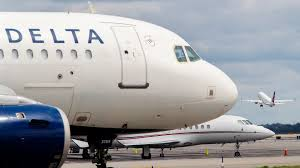 ORLANDO, Fla. October 8 2019– A woman was escorted off a plane at Orlando International Airport Sunday after boarding a Delta flight to Atlanta with neither a ticket nor identification.

A passenger said she called a flight attendant to her assigned seat when the woman refused to move.

“She said very bluntly, ‘I’m not moving,'” the passenger said.

The flight attendant tried to get the other woman out of her seat. The attendant said the woman was not listed on the manifest.

The passenger said a supervisor and a pilot came over but also had no luck removing the woman.

Employees asked the woman several times for her boarding pass.

“Who knows where I threw it. I just threw it out a soon as I got on the plane,” the woman said.

Employees then asked for her ID. Witnesses said that’s when the woman held up her phone.

According to the passenger, the pilot called police, who were then able to remove the woman from the plane.

The passenger said she was able to get in her seat and the plane taxied down the runway but it was quickly stopped.

“We were stopped pretty quickly, and the pilot explained it was because the lady was not cooperating with TSA (the Transportation Security Administration), and she did not have a ticket to any airline at all,” the passenger said. “They could not figure out how she even got on the plane.”

After about an hour, “The plane was searched by dogs and TSA agents. Every single passenger had a pat-down, and all of our bags were searched again,” the passenger said.

The plane was eventually given the all clear and made it to Atlanta.

TSA told Channel 9 the woman was screened but did not provide any additional information.

It is not known how the woman was able to get on the plane.

Delta released a statement regarding the incident:

“Delta apologizes to customers of flight 1516 for the delay after a person not ticketed for that flight was removed from the aircraft. Security officials then directed precautionary rescreen of everyone onboard. Delta is working with local law enforcement and the Transportation Security Administration on their investigation and we are conducting our own review of this as well.”

The plane was delayed by three hours because of this. @Delta released this statement apologizing to the passengers on the flight and states they’re now conducting their own review of how the woman got on the plane. A passenger says the woman had no ID and no ticket.