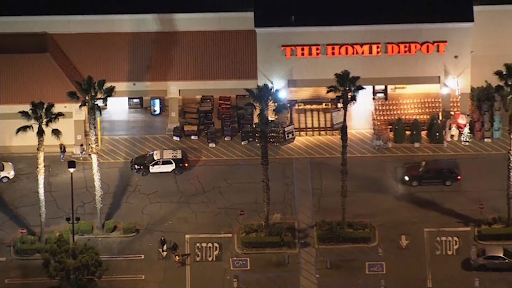 Los Angeles County CA Nov 30 2021 Four men have been arrested in connection with theft at a Home Depot in California, where as many as 10 people entered the store Friday night and left with a range of stolen tools, according to law enforcement officials.

The thieves made off with hammers, sledgehammers, crowbars and other tools. After grabbing the items, they ran out of the store and got into a getaway car parked outside, Meza said.

The theft comes as similar tools have been used in a number of smash-and-grab robberies at high-end stores in several major US cities this month.

At least 18 people broke into a Nordstrom department store in Los Angeles Monday night and stole thousands of dollars in merchandise, the city’s police chief said. Similar crimes have been reported in the San Francisco Bay Area, Chicago, and other cities.

Saturday, Beverly Hills police officers spotted a red vehicle with front-end collision damage matching the description of a vehicle believed to be connected to the flash mob theft in Lakewood, according to a news release from the Los Angeles County Sheriff’s Department.

While conducting a traffic stop to investigate the vehicle, officers found new tools inside the car, “possibly from Home Depot,” according to the news release.

The four men in the vehicle, whose ages range from 19 to 22, were detained and later taken into custody by Los Angeles Sheriff’s Office detectives and booked for conspiracy to commit burglary, officials said.

“There are still several more suspects, and suspect vehicles, being sought in this flash mob burglary and many more like it,” read the release.

Three of the men will have their initial court appearances on Tuesday Bellflower, California. The fourth man was receiving unspecified medical treatment prior to being booked, according to the release.